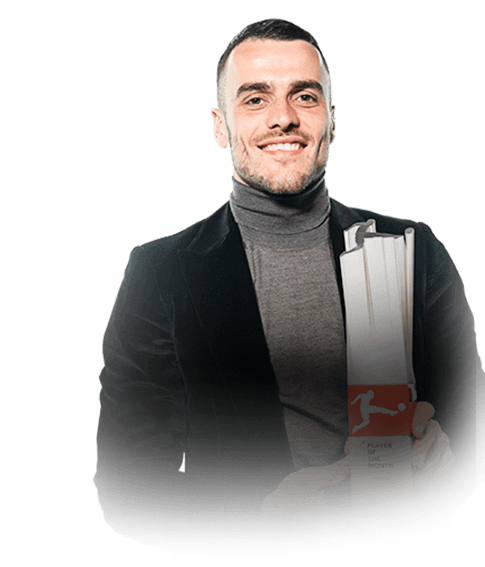 Overall this was an amazing card for me, I played him at RM in a 3-5-2 and he was an absolute machine. I used an anchor to max out pace and boost defending and physical. He can play anywhere including rm/lm/cdm/cm/cam/lb/rb… the list goes on and on.

ATTACKING: Great pace, he feels great on the ball for 6 foot and his dribbling and ball control is tight. Passing is absolutely solid, hardly any misplaced passes, getting himself 4 assists consisting of 2 crosses, one long ball and one short double tap through ball. Shooting is very nice for a lm/rm/cm, he is able to either cut inside and hit them long or hit it near post in the 6-yard box.

DEFENDING + PHYSICAL: Defending is solid, I found it easy to defend against Neymar and Mbappé, he bullied them around with ease. Sliding and standing tackles are decent, overall the defending and physical are extremely useable, not Sissoko level, but useable.

SM/WF: 3*/2* is obviously awful, that is the reason this card is 60k. Try to use his weak foot when shooting or passing, he will correct himself to use his strong foot most of the time. 3* skills are hard to use, try to keep the use of skill moves simple, this card is mainly for his pace and his dribbling.

CONCLUSION: An overall great box to box player being able to play any position on the pitch, any chemistry style can be used depending on where you would like to play him. Get him now, even if you do not use him often, he can still be used at 88 rated fodder. Thanks for reading my review,  a like would be appreciated :).

I completed him as a super-sub thinking that if he was bad I could use him as fodder, but he shocked me. First of all, you have to play him on the right, due to his weak foot and the fact he is left footed. He is very good off the bench, he is fast, can score, pass and even defend! Although on the ball we will feel sluggish, the lack of skills is apparent but because of his pace and the fact he can still do ball rolls this can be worked around. Ultimately as a super-sub I recommend you try him with the same thought process I did, he will not single-handedly win you games but he is a fast warrior that will get in behind and score

Dribbling (Sluggish on the ball)

When I first saw this card I was really exited because of the cheap price tag. I played him at LW for a couple of games and also tried him as a CM/CDM. He performed okay at CM but was mush better on the wing. The sad thing about this card is the 2 star weak foot, and so when you shoot with him, its very important to try and shoot on his strong foot. His shooting with his left foot(strong foot) is amazing. He finished really well, but on his other foot he was very bad and you can really feel that he has a weak weak foot. He also is a bit slow turning around because of his low agility and balance for this stage of the game.

Other wise I think that this an amazing card. It is very difficult to take the ball off him because he is so strong.

In the end I do not recommend you completing this SBC because there are just so many better options.