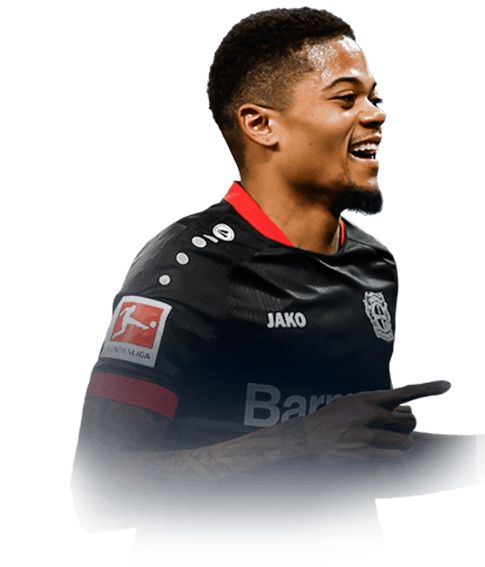 If you need a RF/RW/RM, stop reading this and go buy this guy right now. I'll break down his attributes below. As an overview, Bailey is phenomenal. I've played with many of the best right sided players in this year's FIFA and I can confidently say he's definitely one of the best. He has every attribute you need from a player in his position. He's fast, agile, great shot, fantastic dribbling, excellent passing and great physicals. If I absolutely had to find something not so great, all I could pick out would be his tackling, but what would you expect.

When I first saw that his price (at the time of this review) was hovering between 280,000 - 310,000 I thought maybe he wasn't all that great. So I decided to take a flier and try him and I've been stunned with how good Bailey is. Also, his price is extremely cheap for the quality you're getting. This is just my opinion, but I don't believe the Bundesliga will get another RF/RW/RM for TOTS. If a TOTS card for that position does come out, the only option might be Wamangituka. But with M/M work rates and only a 2* weak foot, he won't be worth it considering you get everything he could offer in Bailey and then some minus the 5* skills. On that note though, dribble a bit with Bailey and you won't feel the need to have someone with 5* skills.With 4* skills and his very high dribbling, he can pull of skill moves with ease and precision. His 4* weak foot and high shooting allows him to score with ease with either foot.

Fast, and I do mean fast. 98 acceleration and 99 sprint speed are his base attributes. These attributes combined with his 98 agility and 95 balance means this guy flies around the pitch with ease.

Some players on this game don't feel as good as their attributes show. Some play better than their attributes show. Bailey falls in this category. He makes fantastic runs that I don't typically see with players of his same position. With 94 positioning, 98 finishing, 99 shot power and 99 long shots, he's a threat anywhere within 25 yards of goal. One thing I noticed right off the bat with him was the whip he gets on his shot. I was very surprised by this since he doesn't have the finesse shot trait. Although, he does have outside foot shot. Anyways, his shooting is fantastic and he buries the shots I expect him to make and some I didn't necessarily expect.

His passing always feels crisp, on target, gets good curve and I've found he can make any pass that I need him to consistently. As an added bonus, with a free kick accuracy of 93 combined with his shooting makes him a serious threat from free kicks with his magic left foot. He also gets great whip on his crosses.

His attributes don't lie. With marksman boosting his reactions to 95, ball control to 99, dribbling to 99 combined with 98 agility and 95 balance, Bailey feels smooth and quick on the ball. His turns are quick and sharp. He pulls off skill moves with ease and precision. His change of direction is amazing, especially with his ability to stop on a dime and accelerate in an instant.

I'll sum this up quickly. He's really really good at getting in the way and getting a few tackles in. Don't expect him to shut someone down.

Jumping 99, stamina 90, strength 82 and aggression 71. At 5' 10" he can win headers against players 6' 1" and under consistently. His stamina allows him to last the entire match with plenty of energy left over. His aggression allows him to fight for the ball and hold players off, especially combined with his 82 strength. I found that he won a majority of his 50/50s even against some of the better CBs due to his strength and shiftiness.

In summary, if you need a RF/RW/RM, you won't be disappointed in Bailey. Comparing him to some of the other top players at his position across the game, this card should easily be priced in the 500,000 coin range. He's a must have if you have a Bundesliga team and if you can afford him, he'd even slot into any iteration of teams as a super sub. Outside of defending, he's one of the more complete players I've played with out of any league on this year's FIFA.

-Pace (he stops and starts in an instant)

-Shooting - easily scores with either foot

-Dribbling - he's agile, has close control and feels extremely smooth on the ball

-Physical - strong for his position and excellent stamina - doesn't fade

I PACKED THIS GOAT FROM MY 82+25 AND WHEN I SAW HIM I SCREAMED WITHOUT THE S.

SO I USED HIM IN A COUPLE OF RIVALS AND I WAS COMPLETELY SATISFIED.

THE PACE IS SICK

THE DRIBBLING IS INCREDIBLE

HE CAN SCORE EVERY FREE KICK

HE IS SO GOOD HE DOESNT EVEN NEED A CHEM STYLE.

BUT I RECOMMEND MARKSMAN

Leon Bailey is an absolute offensive machine, with the absolute pace, lying at 98 acceleration and 99 sprint speed, not even Varane catches him, and applying a marksman as a ST gives him a huge RPP of 93, as well as bumping every offensive stat, bar aggression, into the 80's, with the lower ones being 82 strength, 85 composure and 80 long passing. however on the opposite side, excluding the pace, an insane base 94 positioning, 99 shot power and 99 shot power. His dribbling is also not to be taken lightly, with a stunning 98 agility, 99 ball control and 99 dribbling.

Pace- 10/10 Leon Bailey is blistering, up there with 91 Futties Alessandrini (fifa 18), TOTS Lozano (fifa 18) and 87 UEL Ryan Kent (fifa 20) as one of the fastest players I have ever used in fifa. Through his blistering pace you gain both the ability to play as a get in behind ST, Wide Midfielder and a high pressing CAM. The base stats are already good enough, there is absolutely no reason to increase his pace. It's already as good as its going to get, unless you boost the dribbling, which will make him feel faster on the ball, and even then, the increases will be marginal.

Shooting- 8/10 For me this was great, but not perfect. The outside of the foot shot trait gives him a sense of unpredictability with shooting, as well as the amazing base 94 shot power and 91 long shots as well as the 90 curve affecting the finesse shot, his shooting from outside the box is very consistent, generally scoring where you expect him to with finesse angles, but its unlikely he'll hit something outrageous. From use the only thing that stopped him from being a 10/10 with shooting is the 88 finishing, which although being palatable, he did miss 1 or 2 I thought he should score.

Passing- 7/10 I really don't know what to say about his passing, he played almost exactly to his stats, with 90 vision and 80 long passing he was able to set up assists nicely, but was it perfect, not at all, in my opinion this was the weakest of Bailey, and although he was excellent in scoring and ended up with a high number of assists at 11 a lot of them were very simple across the face passes that can be accredited more to his blistering pace then the passing stats on the card, although I'm sure their where times where the 86 short passing definitely helped his case. Not something to write home about, but does its job just fine.

Dribbling-9/10 This is the next part of Baileys card that really stunned me. I knew it was going to be good going into it, but with the Average body type, there was definite worry that it could negatively affect the card. Let me tell you, that did not happen. The combination of 98 agility and 95 balance as well as the huge 95 dribbling, this card felt spectacular. He weaved in and out of defenders with ease, having locked up the likes of Prime Maldini, RTTF Varane, Showdown Klaiber and FFS James, at times it felt like no-one could stop this card, he was just a joy on the ball, and made me enjoy the game, which is very rare for FIFA 21.

Defending- 5/10 Bailey's defending is an interesting one, he definitely claimed the ball back for me a couple times, re starting the attack on a press after possession loss tactic, but due to his weaker stature, lying at 72 strength and a whopping 24 interceptions, he definitely wasn't great in this category, however the pace being as high as it is, he could definitely track back and with the Average body type, he seemed to be ok at it, he's definitely not 5 at the back ,wing back material though.

Physicality- 6/10 On a physical side, this card is not good, quite weak, even with the marksman, pushing the stat from 72 strength to 82 strength, he still got out muscled by any relatively strong defender, the stamina at 90 is a nice touch to the card, giving him some decent longevity, that can easily last a full 90 minutes, and will finish out extra time if need be.

I really like Bailey, I wont say he's for everyone, the average body type can annoy some, and the lack of high tier passing can definitely send someone the wrong way, but his dribbling can easily be compensated for with the marksman and he can become a beast for you, getting on to any half chance in and around the box, creating a constant threat to the opponent. He just isn't perfect, so for me it's a 4/5 stars

best instructions: Stay forward- will naturally get in behind with the pace, and allows him to drop back to pick up the ball and push it forward

Dribbling- extremely solid, plus he has the sticky trait

Shooting- very consistent, but doesn't blow me away

Physicality- against any strong defenders he gets bullied

Lack of 5*- not exactly a con, with 4* 4*, but having the 5* would have made him something unique and very special