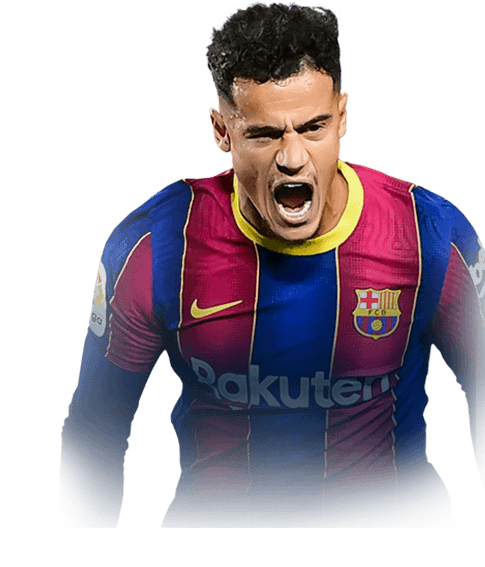 He is absolutely insane and is soooo cheap for the card you're getting. I have played a few games with this god in my team now, and in the video you see here alone he gets 3 goals and 1 assist. His dribbling is like no other that i have used this fifa, including: cruyff, neymar, mahrez, figo, ribery etc... No one can catch this guy with a hunter and his shooting has some insane power on it. Yes he's not that strong but that genuinely does not matter when hes got 99 agility and 99 balance because no one is ever getting near him. The cons on this guy are all stretches, bc otherwise it would just say "nothing" and no one wants to hear that. This is my first time ever giving somebody a 9.8/ 9.9 on one of my reviews, so yeah - hes special.

This Coutinho card is crazy, its amazing on and off the ball his attacking positioning is amazing as is his ability to get open shots off of dribbling and skills, I used fut birthday Mbappe last year for around 1000 games some would say he's the best FIFA card ever however this Coutinho feels so much better, through 7 games in Champs he's bagged 15 goals and 4 assists, and he feels like he's got 5* wf in the box, have yet to try a left foot finesse from deep. Also shockingly strong I had forgotten he only had 62 strength felt like around 85. I subbed off Butra at the start of all games for TOTS Isak and that pairing is insane 7 goals and 10 assists for him as well as almost all the assists going to Coutinho. I cannot imagine how much better he could be on 10 chem rather than 8!

so in my team i use him as cam with king kenny and tots carrasco uptop .and this guy completely changes my team, his dribbling must be the best thing about this card.before him i was using fb reus in his position nd this guy so much more agile and responsive .his passing is also superb nd also scored a couple really nice freecicks. the way he performs skills to must one of the most fastest i hv seen compared to the other 5 star skiller,even though this card does not have the finesse shot trait iis finesse shots are still insane, some of the cons of the card can be the compusure as he did miss 2 easy chances while playing but its not much of an issue and the othere con is his strength which can easily be noticed when he comes up against varane,cambell etc. `but other than that insane card for the value