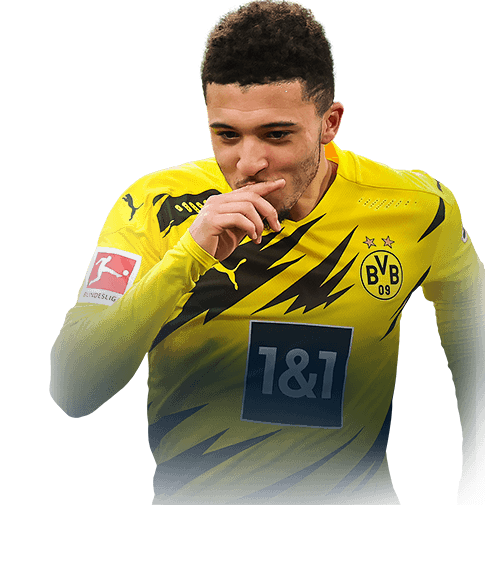 Every once in a blue moon it happens.  This game catches you completely off guard with how a player performs in game. Sometimes it is a negative thing, the player should be cracked, but plays as stiff as a board and produces next to nothing across a Weekend League grind.  However, there are also cases when a player isn’t really on your radar for a top performer… and then blows the doors off of the Weekend League treating it like their own personal playground. Thankfully, Jadon Sancho belongs in the latter category as he continuously shocked me this weekend with his fantastic performances and insane returns.  “But MaeNine, how didn’t you expect it when the card looks cracked?!?!?  Truthfully, I was certainly suffering from a bias from previous experiences with Sancho cards, which clouded my early judgments when looking over the statistics.  Early on in the year, I had a run-in with NIF Sancho, which was mediocre at best even during a time when there was not a ton of competition… if you follow these reviews or me on Twitter: @MaeNine_ then you would know that the 8/10 Record Breaker review was quite the let down based on what you would have expected… the POTM was no different and since then the WhatIF card proved to be much the same.  So in this case it was certainly a fool me once, shame on you… fool me four times, I should get a new hobby.  Yet, I guess you could say that I was fooled for even the fifth time as this card proved to be way beyond any of the expectations I could have had.  Playing with the HAWK chemistry style applied as the striker in my 4-2-2-2 formation, Sancho was the lethal injection all weekend long in the following squad: 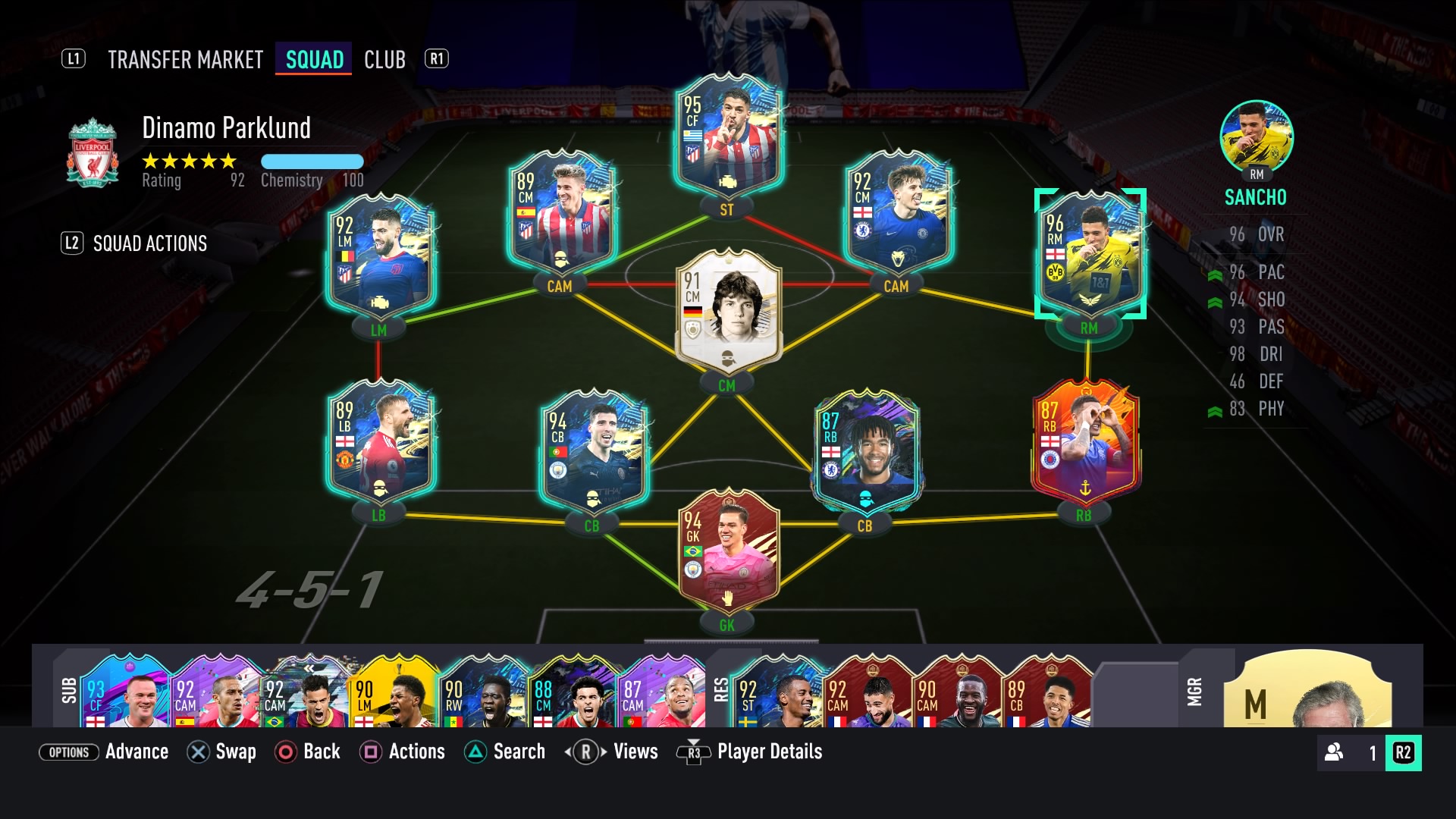 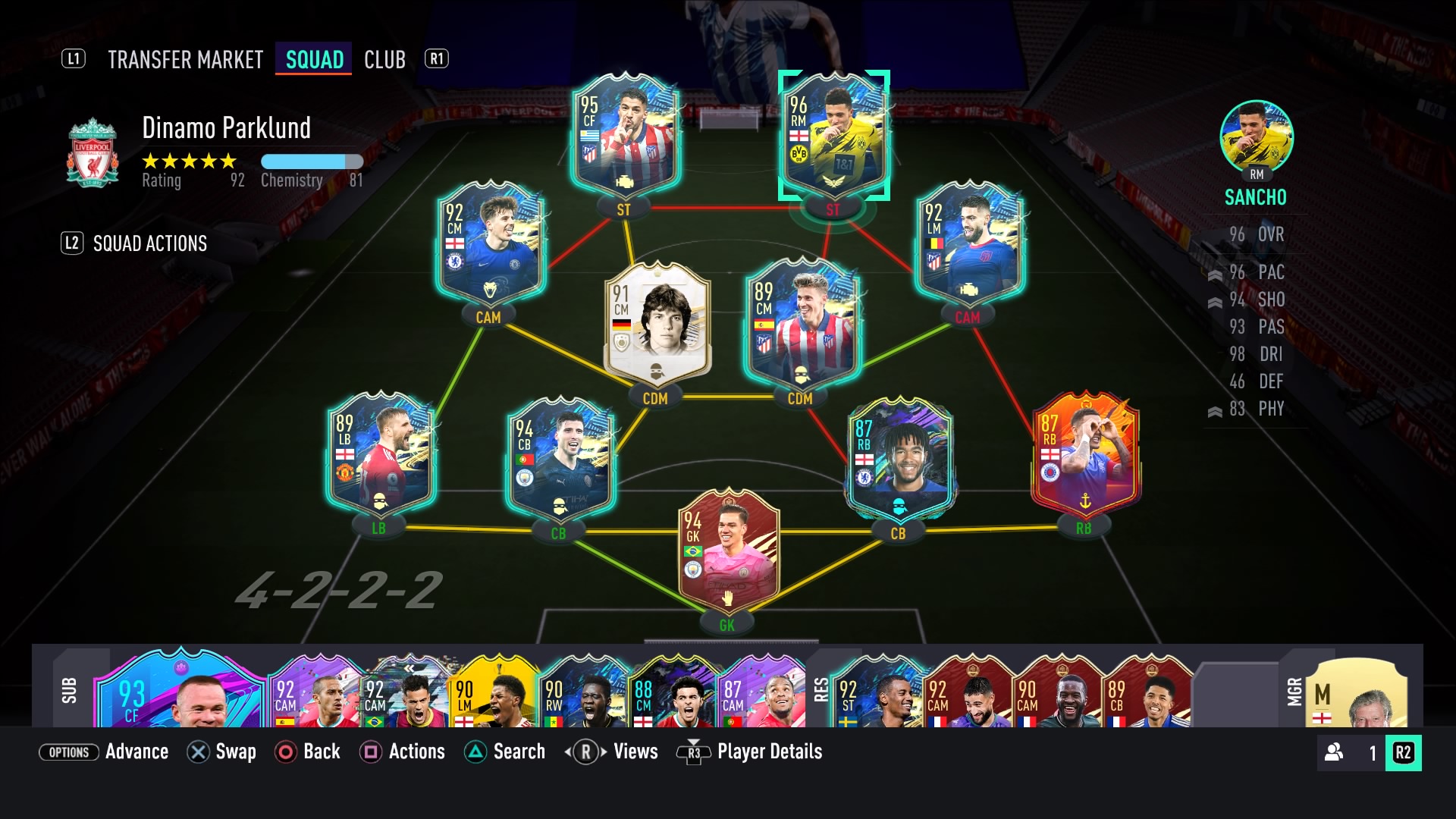 28 goals and 11 assists is a fantastic return for my normal reviews… and Sancho managed it in only 15 matches.  The reason for the shortened review?… I have lost close to 2 million coins in the past month on reviews.  Buying new cards Friday and selling later in the week has not gone well.  So with Sancho at 2.9 on Saturday evening, I couldn’t risk a loss and even managed a small profit.  Of course the next day he went extinct at 3 million, but that just sums me up as a trader.

My previous experiences with Sancho have been littered with fraudulent statistics.  The card says one thing, then I experience an entirely different, often much worse result.  But with TOTS Sancho it was all up to code as his 99 POSITIONING had him constantly picking up amazing space in and around the box, the 99 FINISHING was surgically precise, 99 SHOT POWER continues to be my go to statistic for good shooters and was ever-present with Sancho, then the 94 LONG SHOTS on point, and some serious venom in the 99 VOLLEYS.  I would even say that the 4 STAR WEAK FOOT was closer to a 5 and really only let me down when finessing on the left. But even more important than those numbers are these… 28 in 15.

This has always been the downfall of Sancho in the past… his height, plus an average body type, has made for a clunky operator on the ball.  But finally, finally, finally the pixelated version of the English superstar has begun to mimic the real life phenom.  The dribbling with this card was so responsive and he literally danced in my hands… I can only imagine in the hands of those of you who skill… a nightmare to handle.  Best of all… 98 AGILITY, 97 BALANCE & 99 DRIBBLING as base statistics means you can focus chemistry styles in other areas without worry.

This has caused me some real stress if I am honest.  2.9 million is a ton of coins for one card.  But, this is a fantastic card… so much so that I returned to Elite again this weekend… but at one point was 14-1 with a real shot at Elite One (which I have never accomplished) and finished my weekend well early due to this man’s play.  Now that is worth something… and maybe it is just about 3 million coins in the end?

Even the passing was there. I know it is hard to believe in FIFA 21 that a card was actually consistent passing the ball… but I am telling you this card was about as good as it gets.  The 99 SHORT PASSING is class in those tight spaces around the box and Sancho helped himself to a healthy assist return.  I will say that I do feel that the blistering 99 ACCELERATION & 99 SPRINT SPEED allowed Sancho to hit bylines and channels with explosive pace and certainly opened up easier passing lanes… but he still had to play the quality ball to earn the results.   All in all, this card is an attacking monster and very seldom put a foot wrong in the final third this weekend.

I can’t put this card on a higher pedestal right now… he scores, he assists, he finds the channels, he stretches defences and now… he even has perfect links to U-23 Jude Bellingham.  Seriously I don’t know if it gets much better.  Realistically the main concern is still the price for me.  At this range, you are in the market for 95 Cruyff, 90 Gullit, 89 Eusebio and 92 Kaka. While I have not yet had the pleasure with those options… I have been punished enough by them this year to know just how class they can be.  I am not quite sure Sancho ticks those boxes in the end.  With a drop to 2.5 or lower, it is an automatic green light from me.  The card is scary good… the goals are mesmerizing… and no doubt he would be a fantastic addition to any squad.  Hoping you are safe and well.  Cheers for reading. 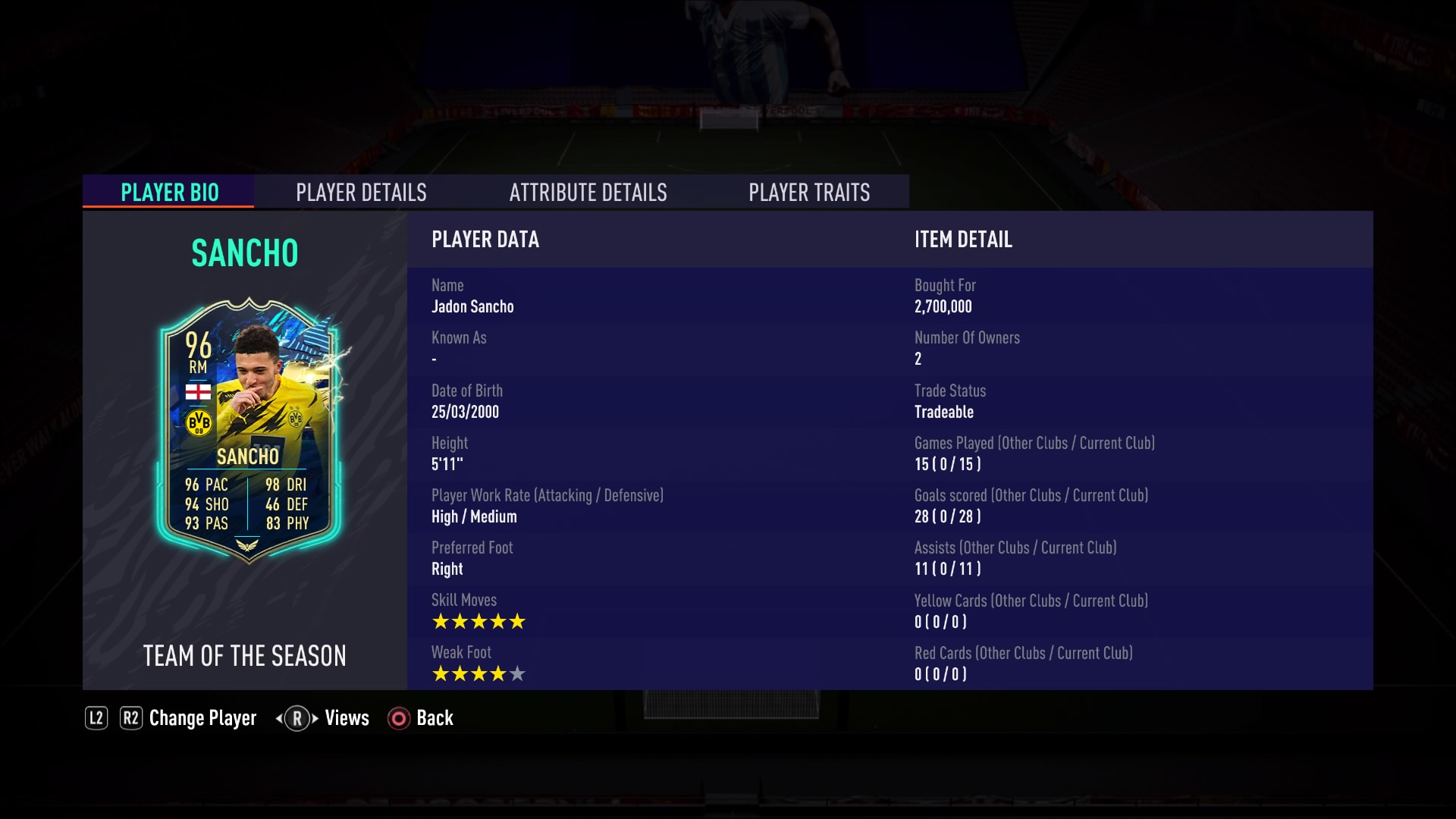 Jadon Sancho is a beast. He is fast, has a good shot, great at passing. His dribbling is insane. '

I packed him from the 85+ and I am very happy about it. I dont know if Sancho is worth 3 mil coins, but one thing if for sure. He is a beast.

For anyone debating whether or not to get him, here's my review: This card is insane!

Tried him in 21 games of rivals so far in division 1 and his return is unlike most players I've ever tried. He's racked up 39 goals and 31 assists in the ST and CAM positions. His 4* weak foot feels almost like 5*, his 5* skills are silky smooth, and his dribbling is insanely sticky. You'll feel the average body type here and there, but for the most part, you won't feel it. He makes really good runs and his finesses are probably some of the best I've seen besides maybe TOTS Messi. Worth every coin for sure

So this is my first review and i don`t now how to start (sorry for my english i am from Brazil) but i got this Sancho in a guaranteed bundesliga tots and i was very happy because it`s fits very well in my team.