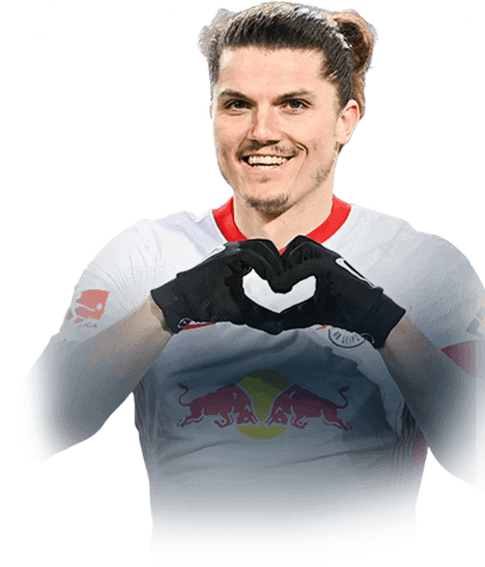 He is sooo broken! I bought him for 200k and he plays soo well ingame. He is way worth much more than 200k and i would pay 300k for this card. Very smooth on the ball and insane long shots with 99 shot power 99 longshots! Such a fun card to use I definetly recommend you to buy him for whatever the price!!!

99 sprint speed with a shadow

AMAZING shooting for a midfielder

Very smooth on the ball

I feel like every single game I play with him, he is just so good. I'm playing with people like Podolski who stand up ones in a time, but Sabitzer is there every single time. His defending is amazing, I play him with a shadow, because I think that's the best chem style to use him with, but also with anchor (tried him with that too) his defence skills are just really really good, even on 7 chem, where I got him. And while his standing and sliding tackles aren't even that good I feel like he's a lot better than those stats in game. But when he has the ball he's in my opinion even better. His dribbling is really amazing. Normally I do skills and stuff, but with his dribbling I feel like 3 star skills is enough to get past a defender. He creates room for himself with a good dribble to pass the ball to other players or creates space to shoot. His passing is really good, the best things about it is his vision (94), short passing (94) and long passing (90). But the best thing about this card is his shooting. Even though I play him as CM in a 4312 formation, he gets a lot of chances. And I can tell you, he rarely misses. His long shots are amazing, with 99 longshots, 99 shot power and 91 finishing you can tell he has the right stats to do long shots. But with his smart runs, good finishing and shot power he's also a beast inside the box. I bought him for 180k but I would even buy him if he was around 300/400k.

Pace is really good, even better with the right chem style

Defensive stats are also good, but even better with a good chem style

Hard to link for hybrids

Penalty's, but if you have a good pen taker that isn't a problem too

I am from Austria and i have seen this boy playing several times. At Rapid Vienna in my hometown, when he played at Salzburg and also and most im portant, i have seen him playing in the National Team many many times as well as at the EURO 2016 in France. He was one of the guys that played the worst there and thats why we fell out of the groupstage early.

But this card is agains all i have thaught. I bought him, because i have my own rule, that everytime i play at least one player of the has to be from austria and play the whole game in FIFA 21. I saw his stats and thaugt, he had one of the best stats i have seen on a card so far. i dont give a damn about body type and traits, because i only play my first fut online this season i dont really know much, but he plays like a god and performs like he is the best on the field. I played that Squad for 15 Games in Division 5 up to 4 and there are the Stats:

I played him on a shadow, because i want him to play my Box to Box CM, but he outperformed everyone on the pitch so i play him with Shadow on Striker.

His longshots and shots in general look very strange but they go in from wherever i shoot. His Pace is invredible as well as his defensive stats, he gets the ball back in the box of the opponent very quickly he i like a mosquito in the dark and i will play him until the end of FIFA.

Thank you very much for reading!

+ movement with the ball

+ i guess for the most people its his Country

+ and may even the League

but if you believe in him, you will get an outstanding player

Its Sabitzer. I packed the Austrian beast in my 81+ Bundesliga one player pack and he's a monster.

His pace is underrated. Zips around the pitch and is always in the right place. Really good long shots as well, give him space and he will smash it in. 93 shot amazing for a CDM/CM/CAM. If I am isolated in the midfield, if Sabitzer gets the ball, he can dribble round or pass it.

When Sabitzer gets the ball, he's so good at getting a pass or two through. For example, he could have up to 6 options of a pass. And he will deliver with 94 short pass. His controll on the ball is flawless as well.

Now his defending is great. I use him as a kind of interceptor in the midfield to start an attack which includes his physical.

Great all-rounder and a must-buy for bundesliga team. Cheap and great. Can't wait to use him with the baby faced terminator Haaland!

I recently used kimmich and i feel like they are good players to compare, similar heights, wf, sm etc... And i have to say that kimmich is the best cdm i have ever used - so using this card it kinda felt sad because of the obvious downgrade. But anyways yeah, hes very fast, decent at shooting. He has fairly good passing and dribbling but nothing over the top. If u use a shadow then the defending becomes decent. Physicals are eh. Skills is obviously a let down but oh well. He's not the easiest to link as he litterely has 0 good team links and 0 good nation links. But a fairly cheap good cdm option. Just imagine Kimmich but you took the passing, dribbling and shooting away and made them all like 4 or 5 worse (or about 10 worse for dribbling).