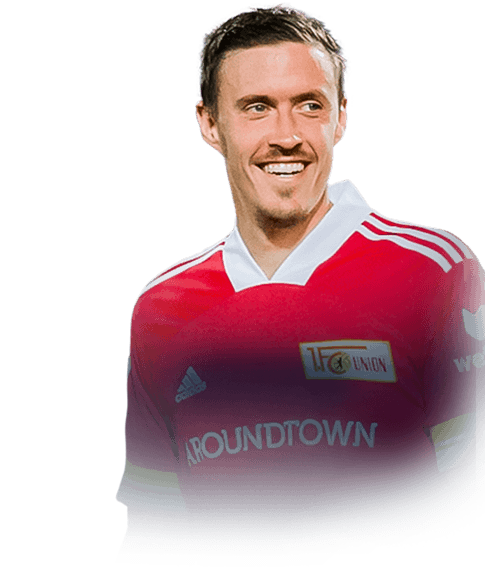 I decided to craft this guy because I was looking for that slick player in the central CAM role (4231).

This guy is fantastic! I used him for 5 division rivals games (Div 3) and scored 7 goals and 5 assists. He is one of the best players I have used. I would definitely complete him if you have a Bundesliga or German team, or a big union Berlin or Kruse fan.

Use an engine and he goes up to 96 sprint speed with 94 acceleration. His shooting is already fantastic with 97 attacking positioning 90 finishing 97 shot power and 90 long shots. In the dribbling category he goes up to 99 vision 99 crossing 98 short pass and 95 long pass. He also goes up to 99 curve which is very helpful. 90 agility 99 balance is great, 89 reactions 99 dribbling and great composure. His stamina isnt insane but is decent, he will be fine in my opinion. 72 aggression is okay but doesn't get bullied off the ball which is great. This guy doesn't get a lot of attention because he isnt a big name among the Fifa community. He is great valued at only 150k, and is easily craft able during the upgrade packs.

For contextual reasons so you dont come with the typical "Ha, div 10 player use this" I´m a div 2 player 1843 skill points and Gold 1 in WL.

If you have a Bundesliga squad or a Germans one this player is a must have. It reminds me of his TOTS from last year. Some people may say that Kruse may feel klunky and that turns like a truck. But this is not the case. Of course he is not as agile as Neymar or Neres.

One amazing thing about Kruse is his shooting; banger after banger with his left, he has no chill when facing OP defender like Varane or Kounde. Another great thing is his positioning, when I wasnt attacking with him, he was in a great postition even for the rebounds.

Maybe a little bit of stamina