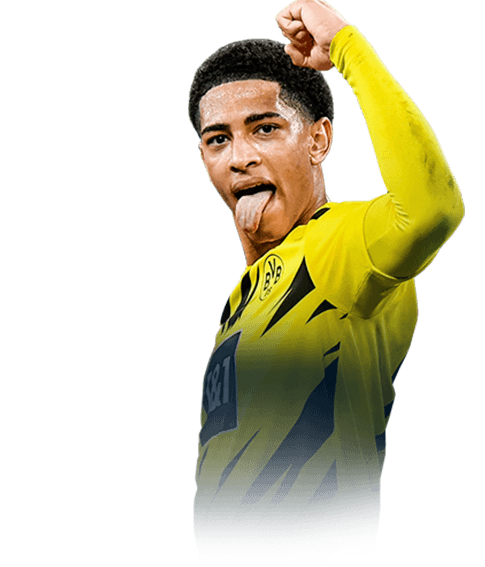 Hey guys! It‘s my first Review here on Futbin, I hope I can help!

As his SBC already expires on Friday, I wanted to give you guys my first impression of this card!

What can I say? Bellingham's card is exactly what I was looking for in my team. He plays the offensive part in my central midfield (4231(2)) next to Renato Sanches FB and really convinced me not only because of his perfect link to Haaland and Sancho TOTS!

So what are his strengths?

I wouldn't say they are major disadvantages, but simply things I noticed in the first few games:

It's not a card that completely changes the game, but I think it's a lot of fun and priced really fairly for an Englishman in an SBC. If I had to give it an overall rating, it would be an 8.5/10 for me, but since I've only played 4 games with him myself, that may improve upwards once I get more used to him! Finally, there is not much left to say except that I hope I could help you with your decision and stay healthy!

As a Dortmund fan i had to get him. I always try to get all of Dortmunds special cards when they are SBC so i had to and i do not regret it. He has a lot of good stats but at the same time he has some stats that let him down a bit. So i played him as a B2B in a 4312. His pace was really good nothing wrong there 9 out of 10. Shooting was good too no issues there 8 out of 10. Passing was very good did not really mistake any passes 9.3 out of 10. Dribbling was also really good really no issues there 9.1 out of 10. Defending was good but also some things that were not perfect like his defensive awareness it was not the best but again nor horrible, 8.4 out of 10. Physicality was decent strength and stam are good the other 2 are still good but not as good 8.5 out of 10. So should yo do him? I would recommend him he was very good especially if you play him as a box to box he can defend and attack both very well so he is really good. Im going to give him a 8.9 out of 10 overall.

I use him as cm next to Amiri tots moment and he is amazing. good defense and he's attack is excellent. if you have de coins do him.