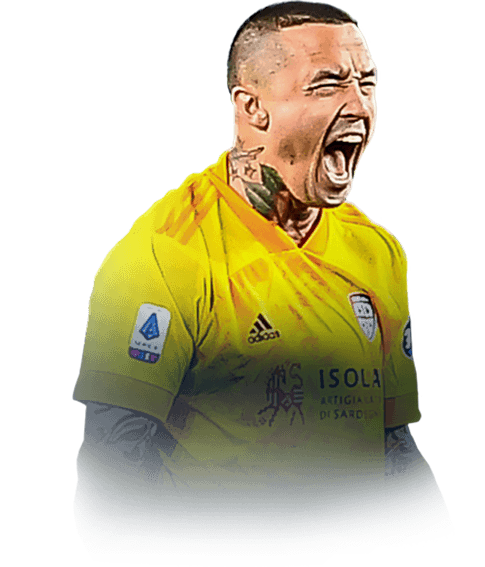 When i first say this card i wasnt sure of doing him cos to be honest it is pretty expensive and i have put half my fodder into him but then after 1 hour playing with him he is a machine. Yeah there are some flaws but overall it was a very good card.

Pace- I am pretty sure everyone cares about pace and is defenitley the most important thing about a card in fifa cos everyone there with 90 paced rbs at cbs or varane and lacroix so to win you really do need pace unless you a god at passing around but the only real reason i have done this sbc is because the pace is good enough. and to be honest for a cm it is more than good enough. with a shadow or hunter its class for sure and there is absoulutley no problem. Sprint speed is calm acceleration is also really good and overall i really like this cards pace. 85 pace plus and you are approved for my midfeild and he certainly is. The pace is fine and he doesnt feel slow at all.

Defending- To me the best part about this card was the defending it was ellite. the jumping wasnt the best but then my cbs got it covred and people dont really cross that much but the heading was a little bit of a problem somtimes but it was good most of the times. But if it comes to just winning the ball back and intercepting incredible passes he was solid. Great defending to be honest. Had a really good game session with him and yeah i was impressed. defending was just so top tier. He really has incredible tackling. and his interceptions were unbeleivable honestly. Got in the way of sooo many great passes. goal scoring passes.

Shooting- he was pretty damn clinical i had about 15 shots with him and he scored 8. very good tbh. I dont expect him to score every chance but he did really well with 1v1s considering his finishing is a bit low. His long shots were amazing. His finesse shots were so good if he had the trait i can gaurantee 10/10 every shot would have gone in. I scored 3 finesses with him and they were sooo segsy. Great finishing from this lad.

dribbling- Its good he isnt that agile but apart from that he was very good at dribbling,. I dont know what chem style to give maybe engine or shadow or a finishing upgrade but dribbling was good i wont say really good but it was good not many flaws with it but the agility improve that and he feels great on the ball.,

Passing- it was soo good. his passing accuracy was like 97% istg, Soo many long and short passes completed crossing was ok but the short and long passing were great

Physicality- He strong and he isnt weak at all no flaws there at all. he wasnt tired at all tho and his stamina was incredible

Overall- 9.5/10 some flaws here and there but good overall maybe cheaper alternatives but i cant really think of any but storyline duncan he is a bit similar but naingolan is just another level i cant really compare him to many cards but he is the best cdm i have used as of now i think. really good at winning the ball back and yeah. only 9.5 due to the price and club isnt the best but league makes up for it,

Good in every department overall but some flaws here and there.

weak foot but i cant really feel it so yh.

Agility was the only concern really if i put a shadow on him but if u want him cdm or cm just winning the ball i dont think you need to care about i like my players dribbling so ;/

He can play absolutely any tackle you want him to. Whether that is him spinning and shoulder barging mbappe out the way; or stand and slide tackling players from anywhere on the pitch, he can also play beautiful through balls and nice simple play making passes. His dribbling is never going to be perfect as he lacks the 5* sm (however that 1* upgrade is very nice) and also he has the stocky body type (if you check last fifa b4 unique was a thing). We all know that radja has always been a great midfielder and a very important part to a midfield forever, but I did not expect him to be all over the place like he is, he is there for a simple pass in the middle, a tackle, a shot, a way to get out of a tough and pressured situation etc... I used the basic chem style btw which obviously helps the all round thing. If you need a sirie a midfielder or just a simple midfielder than 100% cop this guy, he can do anything for you.

Pace for a midfielder

Finishing could be better

I tried the ninja in my 442, he's very good in defense, great tackles and he fight to win the ball. he's also great in offensive role with a very good shooting and brilliant passes.

He's strong, fast, great passes and great tackles, when he's 1vs1 he's ready to shoot. what else? Do it, NOW.