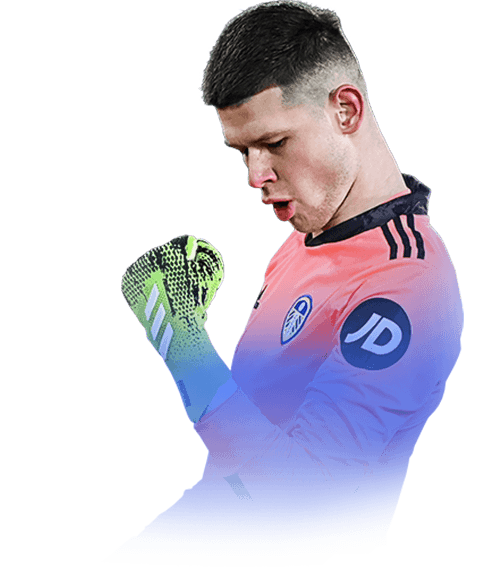 This card is too good for its rating. Just 74 but as we all know his stats aren't anything 74.

He is basically a fifa 19 Courtois. I say this because not only is he tall but his handing is very very good. The guy catches the ball and it sticks to his hands.

Could have improved reaction for better reflexes but hey, pim yashin has 95 yet he let's in shots

Reviewing a Keeper in FIFA 21 is like getting punched in the face and trying to decide whether you prefer the right hook or left hook. I originally had TOTS Neuer in goal and he is absolute garbage, sometimes he'll make a diving animation without moving, as well as his positioning being awfully off. I grinded it out with him until I saw Illan Meslier. At first glance, you think 74 Rating? not worth my time and I'd agree initially until you see his stats. Taking a better look he's the french Alisson Becker. Since it's July and we all hate ourselves we still continue to play the game. 3 Wins, 6 Assists, and 8 Goals are the best you're ever going to get for a top-tier premier league keeper which you'd be forced to keep since he's not fodder (74 Rating). Not that formations mean anything for a keeper review I played a 4-4-2 with Silas and Griezman up top

We'll start with his lowest rating (from my personal opinion) and that's his handling, he kinda just palms it away and doesn't catch it. Not a big deal since he palms it away from the opposition player but can be quite unnerving at times.

What I really enjoyed about the card is his positioning and his reflexes. This man is cat-like, almost to the point I think he gets a boost because he's silver. He doesn’t concede long shots and mid to close range he’s actually really good, even saves the ones every keeper misses. A specific game was that he got an 8.8 rating in a game where a draw would've been fair although I won 6-1. Both I and my opponent had 9 shots, his Donnarumma was awful and finished with a 4.8 rating.

I think when people match against someone with a silver keeper they probably think it’s an easy win. For the first time in FIFA21, I feel like my back 4 as well as the keeper is solid, with Tierny, Lindelof, Lacroix, and Mbabu.

Most people in reviews say how amazing a player is without faults and while I’m doing the same to a sort I must say obviously all keepers are just the worst. With this card I’d say don’t use keeper movement, he’s not fast enough for that and feels kind of slow when moving across.

The big pro of this card is that it is absolutely free, a brilliant nation and league, and is also totally attainable for everyone. Now, this could be me just enjoying his card and chatting absolute waffle to someone who has used him and hates the guy. But just give him a try, it's not like you have to keep him between the sticks.