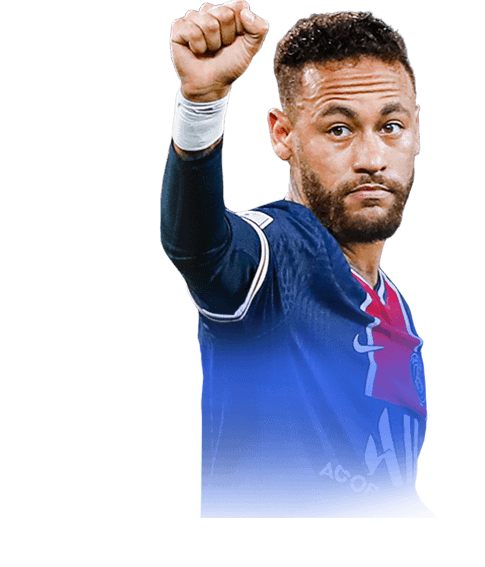 So, I was among these lucky people who got this Neymar in the ultimate futties upgrade pick. Obviously everyone knows this Neymar is gonna be crazy good but, I want to more specifically speak about this card in comparison to all the other high end cards and icons on this game. I used Neymar 96 tots for almost 200 games, was able to sell him on and use this 99 card of his, so I have a lot of gameplay experience with both of them and will discuss that as well. Up front, I've used this card in FUT champs being an Elite 2/3 player and on division rivals at 2400 skill rating. He played either as a left striker in 442 or as a CAM in the 41212(2).

Pace 10/10: The speed is crazy. For some reason in my opinion noticeably quicker than his 96 tots, he just has the better sprint speed you can feel it, he doesn't really slow down in longer runs, he just explodes and keeps running at maximum speed. Combined with his 99 agility and the Neymar bod type, definitely one of the most difficult cards to catch up to this Fifa, usually if he's in and away you cannot catch him

Shooting 9.9/10: Fantastic power shots and finesse shots. His shot power feels better on this card than his 96 tots. He's also the best free kick taker I've used this year. If you green the free kicks, they'll fly in most of the times even with a player on the line if you really aim top bins. The downside here is his penalty run up, absolutely frustrating and no help at all although his base stat is 99 on pens, so I cannot give him a 10/10 for this slight contra

Passing 10/10: Again, passing is broken on this game. 40 yard through balls are no issue with the likes of gold dembele. In my opinion this Neymar can play all the passes the game mechanics allow you to, being able to play them on booth foot equally well with the 5* weak foot at any angle so that's a huge + point as well. Also his responsiveness is to mention as he can release the ball quicker than any other player from his foot in my opinion

Dribbling 11/10: Hands down the best dribbler I've used on the game. Pele lacks the individual dribble animations, R9 has that clunky dribbling sometimes, Messi's left stick is magical and the best, but he lacks the 5* skills. Thus for me Neymar is the most complete dribbler on the game. He's literally dancing on the pitch, when the gameplay is Smooth there's no stopping him. Poetry in motion. Best card as well in poor gameplay which we'll discuss at the end and is a massive pro

Defending 4/10: Now this is obviously a very much irrelevant stat, but nonetheless I'd give him a good 4 here. He does have the speed to chase players especially fast wingers or overlapping full backs for example. Also it is noticeably the most physical Neymar card, he won't bully opponents but, he can challenge them and sometimes even get away with the ball. I played him striker in a 442 but also CAM in 41212(2), as a striker the defending truly irrelevant

Physical 8/10: So this is what it comes down to for me, I never really played the 96 Neymar at striker because, I feel like he lacked just a little bit of power and force, he was much more a maestro in the CAM position scoring tons and the heart beat of the team. This 99 Ney can play any attacking position. The strength upgrade is very noticeable. If you're thinking about upgrading the tots, I can tell you that you'll definitely feel a difference here most. He's no Lukaku, but the way he moves with a now acceptable level of strength to sometimes hold of players 2 or 3 additional touches makes this card unfair

Value for money: Now, if you look at cards in a similar price range, no-one beats him. even R9 both prime and prime moments aren't as good as him but that is my opinion based on my gameplay experiences. Cruyff 95 is very similar but, lacks the explosiveness. Cristiano 99 is very good, based on your preferences you may even like ronaldo more than Neymar 99, but if you know how to use skill moves and especially play in the higher weekend league ranks, Neymar will enable you to score goals when others are stuck in the mud or create the golden goal you need in 50/50 games. 4 millions is a lot of coins but he's worth every coin. If you love skill moves, there's no debate whether you should get him or not. Should you purchase the tots or summer stars Ney? If you want the full experience of Neymar, I really recommend using this version, it is noticeably better.

Now to conclude. Neymar has been my favorite FUT item in all of the past fifas. I played his 85 gold card at Santos, his toty in Fifa 16 and also the tots cards in Fifa 18,19,20. This is his first ever 99 card. It's hard to compare him across the different titles, by rating this is his best card, for me it's his second best behind the 98 Neymar tots in Fifa 19. It just seems that this year the elite high end card all have a bit more of a variance to them, they can be in god mode one game and miss a sitter in the next that's just the RNG and algorithm. However for me, this Neymar is the most consistent and best card on the game. There's no card with the same amount of brilliance as him. 5*5* makes him already better than 99% of the cards + his body type and custom animations just wow, add the maxed juiced stats to it and you have yourself the best card on the game. R9 lacks the creativity and playmaking ability ney has, 99 CR7 who was also in that team is amazing r, but just lacks that 5* wf sometimes in those clutch moments & his dribbling is elite level but, Neymar is a good level above elite, it's the best in the game. Cruyff moments is also a very similar card to him, but just not as explosive as Neymar. Now is that upgrade from his tots worth almost a million coins? That you have to decide for yourself. All I can say is that, this card actually makes you want to turn on your console and play the game. For me it's the combination of how good he is and how much fun you'll have with him - Only Neymar can make you feel like this (notice this should be read in Martin Tyler's voice for those who get the association)

+ Strength (compared to other versions)

What an amazing player! I had the luck to get him for free through an 83+x25 and hes an absolute beast for me. When you have Neymar you always have to think about his time at Barcelona, MSN, and what a gifted player he was. Every single thing that made him one of the best players in the world is in this card. He got a well deserved 5 star skills and 5 star weakfoot that actually feels like a 5 star weakfoot. His shooting is always on point and its really easy to score from outside the box with him. He feels very fast and agile because of his great pace, his nearly perfect dribbling and his unique bodytype. Playing him is really fun and makes every game easier for you. If you know how to dribble its nearly impossible to lose the ball. His rainbow flicks are amazing because they are unique and not nerfed yet. His passing and crossing feels like the ball is remote controlled because every cross is perfect. While playing this card you just have fun because its so unfair in every way. Whoever played their first Weekend League and played against Gold Neymar understands it. Hes just perfect. And if you love Neymar or had one of his cards in earlier FIFAs you will have a lot of fun with his card. You can get the best card in the game, maybe in every FIFA for „only“ 4 million coins.

-Believe it or not physicality

-Maybe the price but nothing else