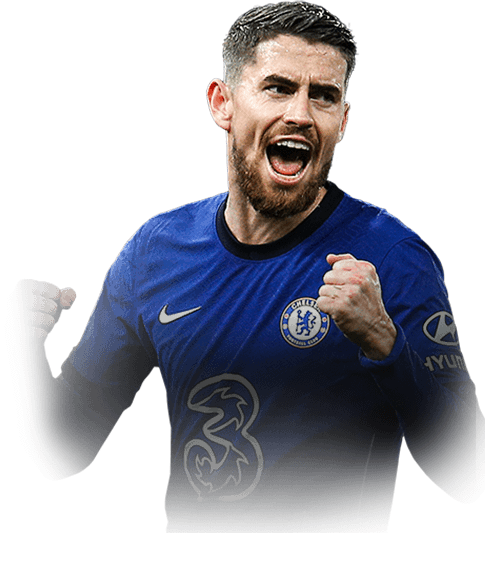 He was the best CM I played in FIFA 21. His Passing is very good, but his Shooting is also very good.

His Stamina is not the best and he can have a little bit more sprint Speed.

A very easy to link card to players link 97 Chilwell, Thiago Silva, Mount, and any Italian! He's Nainggolen gang so will obviously perform well in game. He is very flexible also, and can pretty much play in any position other than maybe goalkeeper, though you're welcome to try him there. I play him in CM and he really gives his heart and soul to the club, tracking back when necessary and advancing forward also. He is class, and plays similar to TOTS/TOTY Kimmich; while I play both in my team I prefer Jorginho.

I have seen multiple complaints lately about the fact that nobody reviews cards here on Futbin, so I decided to review this card.

I have been a Jorginho fan (yes, it is weird) since i was little, because he used to play in the team I support, Hellas Verona. I remember him being very good even when he was very young, and so I have always followed him and his career.

Unfortunately, Jorginho is not usable on FIFA, and throughout the year I never had the chance to use him on the game. But one night, I randomly check Futnin to see what was the content and I see a 94 rated Jorginho. I screamed, then opened the game and completed the SBC as fast as I could.

The next day I went onto Rivals to try him out.

So, Jorginho is a good midfielder. I play him as a CDM in a 4312 and really does the job there. He is surprisingly fast and agile, can defend well and can definetely shoot pens.

If you are a fan of Chelsea or Italian, or a fan of the Magister Jorginho himself, I suggest to do the SBC. But if you are not, I think that there are many better alternatives than this Card.

Thank you for reading.

(The card won't upgrade since England have already won the Euro.) -------> (Definetely not superstition)

SHOOTING IS KINDA WEAK BUT IT IS DECENT