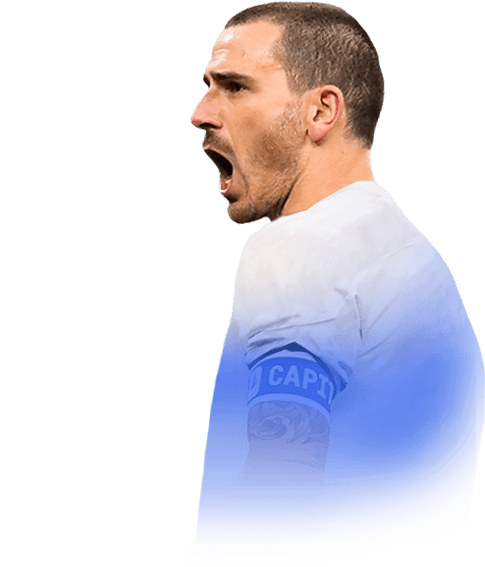 When i saw this card i thought it was Chellini so for 10 mins i got pissed at ea for not releasing a new player then i go on futbin and see bonucii and thought he was in the summer stars team when he wasnt. I clicked on the card and holyyy sh*it the price is sick. One of the best cbs in the game and where is 99 pens coming from :(. Oh well lads this man is strong and why the hell is he goodish on the ball. Not incredibly agile but bro it was kinda fun, tbf u could play him cdm but on stay back cos he cant really score. He is insane defensively and going forward he is ok one thing i loved was how well he can pass the pall. It was insane fam and for what 140 k this is cheap as hell. He is actually mad. Pace wise fine put a shadow on cos acceleration needs to be better and honestly try an engine on if you want to have fun cos he feels clunky but with an engine he felt good on the ball lool icl.

Overall- 9.9/10 for the price its a bargain mate and if you do not like him 96 rated can go into an sbc but i bet u will like him very solid and with a 4 star weakfoot he is a defensive maestro. Personally i prefer him over chellini cos he just feels better on the ball and better to attack with but chiellini is better for defending only cos you can feel he is stronger.

Value-10/10 defender not the most exciting but solid reliable.

in game play- 9/10 sometimes found him out of position but it was not an issue cos other defenders had it covered.

Chem style u should put is either a shadow or catalyst if you want him to be rock solid or an engine for fun cos he can shoot and i love taking pens with defenders so dub.

Stats- Games played 3 goals - 2 assists was surprising because it was 4 for a defender which is insane man was pulling the strings.

DO HIM IF U CAN HE IS SOLIDDD. SPAGHETTI MAFIA's Wall.

Man has pace and dribbling and value is insane

Cheaper than chiellini and i would say better personally for passing and attackive play but both are similar and if you want to sell chiellini for money and have him instead i would recommend it or just perfect link em.

finishing if at cdm cos he could not score.

acceleration when against really fast players cos he does lose track but its fine with a shadow.