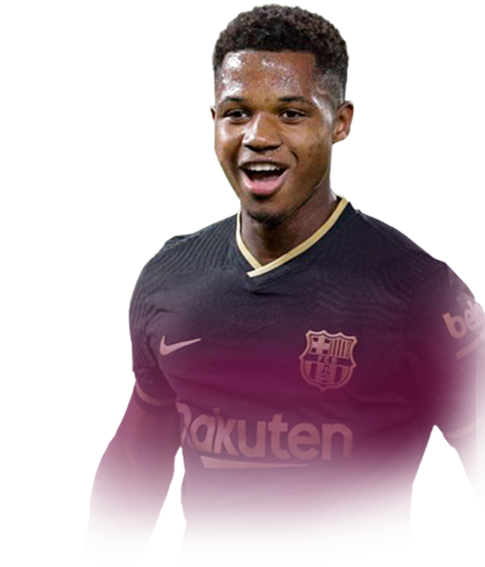 As a La Liga fan, I was disappointed by the lack of SBCs this futties that was useful to me. I did Futties Carvajal but he was made out of position, and I didn't care much for Futties Koke and Futties Depay is super overpriced. So I was ecstatic when I found out Futties Fati was an objective. I grinded out the matches and finally inserted him in my team. Having Futties Adama and Carvajal made it easy to grind this objective.

At first I was wary of his low strength. I usually like my strikers to have a bit more strength to stave off pressure from CBs. To my pure delight, it wasn't a factor. I played rivals games where the opponent had players like EoaE Ramos and PIM Desailly. Futties Ansu did not care. He would absolutely blaze past them and get easy shots on goal. If you use the bridge move, this guy does it with so much ease. If defenders tug at him, he hardly loses balance and it takes pretty decent effort from the opponent to get him down. Through balls to him are as easy to thread as simple passes. Even with the much diminished through ball efficacy these days, Ansu is never a few seconds away. That blistering pace is just a thing to behold.

His shot power and accuracy are phenomenal as well. Chip shots and finesse shots are on point, and believe me I use them quite often. I have tried quite a few other La Liga strikers and Prime Eto'o, and honestly Ansu is my favorite. He's just automatic goals as long as you can get anywhere inside the box and know how to shoot. The only thing you won't get much out of him is volleys, but he can head the ball like the best of them. What he lacks in height, he makes up for in jumping ability.

As for what chemistry style I used, I went with Sniper. I wanted that boost to positioning, shot power and volley and I felt those fit my needs. Others may opt for Marksmen, to boost his strength a bit or deadeye to improve his vision, shot power and positioning.

His stamina is max, so he'll never burn out on you. Unless you frequently foray into extra time, his ability to contribute never diminishes. He's not very aggressive so don't expect him to pressure and win the ball often. Just have him on stay forward and send the ball up and he will get to it.

-Not the best strength, but won't be bullied