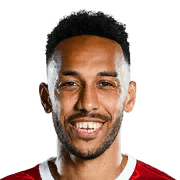 Hes a god. That's all I have to say. 27 goals and 8 assists in 16 games (Qualification and div 3 and 2 but mostly 3). I'm not even good at the game and those are his numbers. Everything this brudda touches turns into a goal. The only thing is you have to get his dribbling up with a chem style (I used finisher), once you do that he bangs them in for fun and scares the living chickens out of your opponent. Not much else to say really, just buy him and have fun.

-Passing is good enough for a striker

-THE SHOOTING. He scores literally everything on either foot.

-His dribbling can let him down at times but it isn't a big issue, he's good enough.

Honestly, was just doing gold upgrades and continued to get the usual shit, then this man walked out and my eyes lit up. From then, my days in division 3 were over and I was fired into DIV 1, he is actually unreal. 300k for him is an absolute steal, he scores left foot, right foot, bridge around the CB and his pace will make sure he gets the ball back in time to finish. On the ball he is a solid player and you don't notice the 69 balance which is unreal as previous years this was letting him down. In all honesty, if you have the money get him, he is an unbeleivable addition and he can turn a decent team into a team of galacticos.

Passing could be better, but your either gonna be banging it into the back of the net or sweating with him so who cares.

Defending, do not slide with him or he is getting sent off.

POV: I'm spanish so i'm not an English usual speaker.

I packed Mbappé the 3rd day from the relase of FUT and I traded and won like 800k coins in a week, so I made a team that costs 1.5 mil coins and Auba is the second most expensive player in my squad, (1st baby George Best) so i'm going to be brief.

Auba is so good, he runs SO fast and he scored an amount of goals, but sometimes I feel him he misses every chance he gets and often feels also a little clunky, I know he is tall and body type helps to improve his agility, balance, etc. But idk, I used a finisher and didn't feel him the agility, but in front of goal sometimes misses but normally makes bangers.

Is the price worth?

I didn't like Auba like I expected, maybe i'll give him another chance, but who knows. In conclusion I quitely liked it, but didn't feel the total performance, if he costed like 250k i'll take it.

Holy shit he is fast

Welcome to the short review for Mr. Lightning Fast for President.

I bought Aubameyang because he had a strong link with my untradeable Partey OTW and I wasn't very happy with Salah as a striker recently (although he wasn't bad, but I needed changes), so I decided to try him. He has scored al least once in every single match (I only have played Division Rivals Div 1 and Weekend League) and has saved me in a lot of games. It's very important to put a Hawk on him because that will improve his shooting, dribbling and a little bit more of pace :D.

I haven't had dribbling problems with him, I felt so smooth running and dribbling. He is faster than fast and he rarely misses a shoot in front of the keeper (believe me, with his pace he will be able to shoot more than once in every single game) and can also pass well the ball. He is really really tall, so he will also win headers and grab L1+triangle even against good defenders. . I also played a game in Squad Battles where he scored 3 times and gave 3 assists, but that stats aren't counted in the final stats.

He is definitly better than my second striker aka Timo Werner.

Packed this man on Div 4 Rivals untradeable rewards, worth 200k at the time. He's pretty good, has good pace, finesse shots with his good leg and regular shots with both, decent passing and good dribbling (with finisher). As my RS on a 4-1-2-1-2, he worked quite well, but I wouldn't pay the 180-200k he's going for, as Son works better from the other striker spot, with Kane and Vardy feeling not too worse for extremely lower prices. The biggest complaint is his low shot, his low shot never goes in if you're shooting it across.If you shoot across regularly it usually goes in, but since I used to have vardy as my RS, and since Vardy's across low shot always went in, I sometimes forget and use it with him, and it goes a little outside the post every single time. BTW his stats lie because of squad battles, I'd say in rivals he scored about 1 goal a game and assisted in .5 a game.

WF (for regular shots and passing)

i am sorry for my english! He is the best player in my squad after luis hernandez.I got him untre from my rivals rewards.I thought that he could fit in my squad as winger.He was awesome.BUT AS ST HE WAS BEAST. I enjoy to play with him at wl as st and depay as cam in 4-2-3-1.HE IS BEAST!!

-Passing could be better

Despite loving his card last year I wasn't very hopeful after hearing some bad things about the card and at the time the 200k price tag was a lot for me. However, after playing around 80 games between div 4 and 3 with this card he has proven he is worth the money. He feels heavier than last year and heavier compared to some other players but with a finisher chem style, he is still very capable of left stick dribbling and he can get out of tight situations. The main stand out feature for me is that with the get in behind instruction his runs are better than anyone else, he always finds a way past defenders and is constantly looking for a run which is great as some other players I have used hang back too much and prevent effective counter-attacks. He just feels like one of those players that always manages to score or do well almost how icons have that feel about them. His passing is noticeably not great but he can still hold up the ball to allow my cam to make a run well.

very quick in a straight line

finishing can be dodgy

dosent make any runs towards goal

OMG this guy is amazing! He just gets through on goal with is pace, and his finishing is so amazing that you always know that the ball will be ending up in the back of the net. He has saved me in so many matches. If you are losing a match he can put hope into the game for you because you know he is always ready to pounce and score. The amount of times i have come up against Varane and Mendy and Auba has just sprinted through like they're not there. He is very good linking with a striker that can make a good pass because he has the pace to receive the pass, turn and sprint through the defence bearing down on the face of goal! If you don't have to much money but want a quality striker then this is by far your best option. I mean look at his stats if you slap a hunter on him. Deadeye works 2 for the passing...

. He can't play in midfield because of low strength and poor defending.

. He has meh passing.

. could be better on the dribbling side of things.