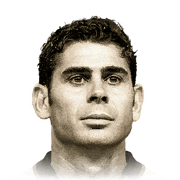 Well.. Of course I took a look at him for the whole futbin community.

Compared to his Fifa 20 price at the current stage, it's not too bad at all. The only bad thing is, that his market price is nearly the same as his SBC value. I know, a lot of you guys would sbc fodder to complete him. But honestly, I'd rather buy him and sell him later on with loss instead of keeping him the whole next year. Just because there are better options right now and there will also be better players released in the future.

Definetely go for a shadow so that his pace becomes a bit better. It's decent, but not amazing at all. Compared to other CB's it can be considered as slow. But ingame it feels alright. Obviously he won't catch up to a lot of players.

Nothing to complain about. Amazing jumping, solid Stamina and also great aggression and strength.

Wins at least 9 out of 10 duels. Nothing really more to say. Just very very good.

All in all, it's a good card. But there are better options for his position, especially more meta ones.

But: He's got amazing defending stats and maybe is the best link for Adama Traore Freeze (after Podence of course). This might be another plus point, but I personally wouldn't recommend completing him.

Absolute beast. After playing some games with him, he is a very fun player to use as he has okay shooting, great passing, and decent dribbling. His defensive and physical stats are insane, his jumping and height makes him win everything in the air, as well as being strong and a bit aggressive. If you pair him up with a fast cb, you won't mind his pace at all as its not even that bad with a shadow. Did his sbc with the players from the 25-83+ so I didn't spend any money to get him. Along with being a player that likes to pass and dribble with defenders, he has great stats for those needs.

His jumping is unreal, deadly on corners and great on defense of course. Good balance and strength combo so he stays on the ground, and his passing can give some assists and can even bang some goals in with his long shot and volleys.

Not really anything bad except his pace, which is not the worst and is easy to work with. His Slide tackle is low while his other defensive stats are almost maxed so it kinda takes away the point of the defense part of the shadow chemistry.

He is a all and all great player. H e can score bullet headers and is a strong solid defender.

Not a great recovery.