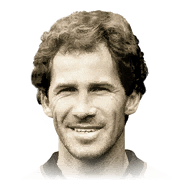 Firstly, it's probably worth saying that Baresi was one of the best defenders of all time, and this card does not put him in that bracket, which is a shame. However he is an extremely good, value for money (for an Icon) player.

Fed up with 4-4-2 & 3-4-1-2 I migrated to a 4-1-2-1-2(2) looking to play more aggressive, attacking football and promptly got hammered in most games, unable to keep the usual high line without getting utterly shredded. With the fullbacks bombing on to create width my cbs joemez and Walker were exposed on the counter. Depth was then set to 4 (from 7) before venturing into weekend league. This created a worse problem in my opinion, defending became horrendously dull with little pressure on the ball when the opponents had it. The other team merely held the ball until one of my CBs tracked a pointless run, rather than letting it go offside, creating space which was usually exploited. I turned to Baresi on the transfer market having had him on 19. He made such a difference. Firstly, the underrated defensive stat meant a return to a high line, shutting down opposition attacks before they even got going. The wingbacks could venture forth as they pleased, he would somehow cover. It allowed me to play enjoyable football in the weekend league, which was refreshing. Also, standing tackles were obscene, and he had that kante-esque ability to nick it away flawlessly when running near anyone.

Standing tackles - he is a machine, will take the ball and frequently monster the opposition player too, leaving them in a heap

Sucks passes towards him when manually tracking opposition runs

Organisation - if this makes sense, he improved everyone else around him

Glides around when defending, occasionally clunky on the ball

Can't recover in behind against top strikers, if the pass beats you it's pretty much game over

I chose untradeable rewards for the first time this fifa and ended up packing this beast. Out of a normal pack it is a huge dub, but out of all the icon's I could have got, I thought this was an L. However, after trying him out, he is now one of my favourite CBs. I played him with a shadow at RCB in a 442. Okay, if he gets turned by any player, even Giroud, he's not catching up. However, no body is getting past him. 99 defending is so good in game. His low physical is barely noticeable and his LT/L2 is great. Overall, I hate to admit it but players like Varane are better to use. However, I would recommend trying him out because he is quite fun to use and if you liked him as a player, he is usable and the only issue is pace.