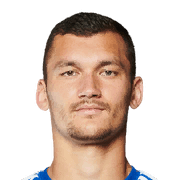 6
Sub out
Upcoming Matches
P. Chemistry
Squad chemistry
ST
76
RW
69
LW
69
CF
72
RF
72
LF
72
CAM
69
CM
63
RM
67
LM
67
CDM
49
CB
46
LB
46
LWB
49
RB
46
RWB
49
Reset
Basic
Sniper
Finisher
Deadeye
Marksman
Hawk
Artist
Architect
Powerhouse
Maestro
Engine
Sentinel
Guardian
Gladiator
Backbone
Anchor
Hunter
Catalyst
Shadow
Comments
Reviews
0
/600
Update my avatar Dos and don'ts
Top Rated
New
Controversial
Show comments
Top Reviews
Only logged in users can submit a review
A review must be written in English
At least 200 characters are required.
Compare this player to other similar players you have used(optional).
If you import your club to FUTBIN or send us an image with the player data(fill the form below) your review will be marked as verified.
Include what you liked about the player in the pros area and what you disliked about the player in the cons area.
Your review will be manually checked during the next 24 hours.
Chem Style Used
Formations
Position
Rate Player Base Stats (1-10)
Pace
5
Shooting
5
Passing
5
Dribbling
5
Defending
5
Physicality
5
Most Used In:
Submit Review

At first I was a little sceptical. I wanted to use Ben Yedder as striker but due to a Squad Builder Battle I had to use Ludovic Ajorque. Pino, the guy I played the Squad Builder Battle with, wanted me to have a terrible weekend. But nothing is less true, I had the time of my life. Must say that its impossible to use this guy against good opponents. But when your record in the Weekend League is 5-9, its normal that the opponents aren't that good. With 6 goals out of the first 10 games I had the idea that this could be a though weekend. But then I started to learn how to play with this guy. He's not pacy, doesn't have a great technique or a good weakfoot. I needed to play around him and when he makes an intelligent move in the box, give him the ball and he nets it. Just a player like Bas Dost. He scored hattrick after hattrick to shoot my towards gold 3. A great result with this type of striker, while seeing everybody used strikes with loads of pace. It is possible to use a slow striker and still make loads of goals. He made a shocking 42 goals in 30 Weekend League Games. Have to say that he was invicible in some games, but in others he scores 3 times. At last I want to say thanks to Pino who made it possible for me to play with this guy. I told him when I scored 10 goals, I had to buy a poster of Ajorque. And when I scored 20 goals with our big friend he had to buy the poster of Ajorque. Now I get a FUT Card of this guy which I can everytime I'm wakeing up. Name a better love story.