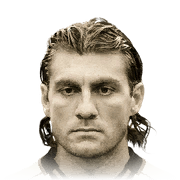 -
Sub out
Upcoming Matches
P. Chemistry
Squad chemistry
ST
88
RW
81
LW
81
CF
85
RF
85
LF
85
CAM
81
CM
74
RM
79
LM
79
CDM
61
CB
58
LB
58
LWB
61
RB
58
RWB
61
Reset
Basic
Sniper
Finisher
Deadeye
Marksman
Hawk
Artist
Architect
Powerhouse
Maestro
Engine
Sentinel
Guardian
Gladiator
Backbone
Anchor
Hunter
Catalyst
Shadow
Comments
Reviews
0
/600
Update my avatar Dos and don'ts
Top Rated
New
Controversial
Show comments
Top Reviews
Only logged in users can submit a review
A review must be written in English
At least 200 characters are required.
Compare this player to other similar players you have used(optional).
If you import your club to FUTBIN or send us an image with the player data(fill the form below) your review will be marked as verified.
Include what you liked about the player in the pros area and what you disliked about the player in the cons area.
Your review will be manually checked during the next 24 hours.
Chem Style Used
Formations
Position
Rate Player Base Stats (1-10)
Pace
5
Shooting
5
Passing
5
Dribbling
5
Defending
5
Physicality
5
Most Used In:
Submit Review

I am a DIV 2 player, gold 2 or gold 1 so not that great, and I dont have that many coins. I ended up selling my mane and de bruyne along with my coins to do the base or mid-icon pack against my judgement. I'd done three or them before, getting giggs, mid butra and mid keane. I should have stopped but I didn't. I tried to do icon roulette but I messed up and immediately saw him in my squad. I was crushed when I saw his price and stats. The big L looming over my head as I regretted my life choices. But in order to vindicate myself, I put him in my squad where he could fit, and since I had too many strikers, I put him at CAM. I was pretty let down in the beginning because he just did not have that passing or dribbling that de bruyne had. But his finesse shots were pristine, and his strength allowed him to keep the ball up. I have stuck with the 4-1-2-1-2 all year, but changed it up to a 4-4-2 defensive in game. I play him as a box to box CM. Note that he will get tired and will have to be subbed off sometimes. Despite Vieri's 41 defending, his physical and heading stats allow him to defend relatively well, and he can bring the ball up and hold it if necessary. I have a bunch of 5 star skillers around him, so he is there to get the ball and shoot or hold up the ball and pass it to someone who can actually dribble the ball without kicking it 30 feet in front of him. I put catalyst on him btw. Be patient, don't run around with him with the ball, just keep the ball or just use left stick dribbling.

passing is ok with catalyst