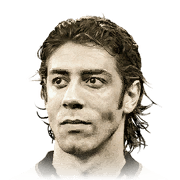 I originally recruited Rui Costa for a chemistry link to POTM Felix and as a replacement for RTTF Griezman, with whom I was not happy at all.

His main job is to drive long passes behind the defense, create width in attack in a mainly 4-2-2-2 system and occasionally man the box and score a lay off by Felix or Nedved.

Defensively, I was looking for a player with sufficient strength to push opponents on the side on the pitch and create pressure early during opposition attacks.

I must say that he excels at most of the tasks. His passing is brilliant, he is very strong physically and he is always in a good position on the pitch. The one thing that I had to adept to compared with Griezman RTTF, is that you need to give him more time for finishing to find the right composure. If you do that, he will score nicely for you as well. Even though I don't need him anymore chemistry wise, he will definitely stay in the squad for another couple of weeks, as I really enjoy his presence and oversight in my attacking midfield. Whereas Messi likes to drive into the box with beautiful curved finishes, I know that Rui Costa is waiting just outside the box and will play a clinical pass to either Felix or Nedved, which they will convert.

Disclaimer: I am a Gold2/1 - Div2 Player, not awesome, but a bit above average.

I was kind of disappointed to see him pop out after seeing the Portuguese flag in my Mid or Prime Icon Pack from completing the SBC. Me having the awful team I do, I realized I couldn't be mad with a 90 overall Icon CAM, especially one who is a green link to my 90 overall TOTGS Bruno. At first glance, I thought that this card would be making more of an attacking, offensive impact on my team, thinking that putting Hunter on him would just make Goals start coming out of his ears, but I was wrong. As I play with him more and more everyday, I realize and understand how he is the perfect player who you can give the ball and let him move up the field and create space for his teammates. When I can finally afford some better strikers, I am going to take Hunter off of Rui and put Engine on him.

He is a great passer, and is a great dribbler. Without any upgrades to his Dribbling/Physical stats, he still feels like a beast who can get around anyone and if he is contested physically he will stand his ground. All of his Dribbling stats, specifically Dribbling, Ball Control, Reactions, and even Agility, all feel better than the number stat entails. I feel like this card will be even better once Engine is put on him.

With Hunter however, he definitely can shoot. His shooting is very good and definitely above average, but don't expect too much.

I have used just about every single formation in this game and I honestly change my formation like every 3 hours of playing this game so, I can't even really remember or tell you any formation he stood out in.

Some stats feel better than the number might entail.

Not too expensive for an Easily linkable Prime Icon

Can't really place defense if you need him to

Doesn't have the "Icon" Feeling to him

After spending nearly all my club to do the prime sbc icon, i was really sad when I saw the portuguese flag, Cam and being rui costa. When you see he is worth 280k, you can be dissapointed. But i told myself i did not do this sbc for nothing and gave him a try :

I used him in a cam position on fut champs with dybala moments at striker.

Damn he was good, he nearly scored me 1 goal every game. I use hunter to make his shooting and pace better, and it turns him in a absolute beast. Half of his goal were from long shots. He has a super left foot, and you really enjoy the 4* 4*

if you want a cheap icon, buy him