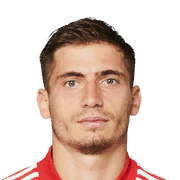 As you can understand, English is not my first language. Please be comprehensive if I'm doing some mistakes ;)

Where to begin ? Why I wrote a review on that nobody will see, on a player that nobody knows ?

As a Stade Brest fan, I was excited when I saw that my club signed this young LB boy who dynamited Ligue 2 for two millions euros. During a cup match against Bordeaux, I spoke to him and he promised to do something for me. One year later, in a November 2020 night, after Brest victory against Lille, where Perraud scored 1 goal and did 1 assist, he gave me his jersey, which was for me an invaluable gift. To thank him symbolically and, I decided to put his 73-rated card in my FUT team, for the rest of the year.

I'm a pretty average player from Division 5, but having a silver card is still surprising for opponents. I linked Perraud with Kimpembe, next to Koundé RTTF and Atal RTTF.

After more than 75 games played online with him, it's time for me to write a little review on the future left-back star from France.

Nobody is perfect unfortunately ; and as a silver card, there are necessarily cons.

To conclude, we can say that more than a fan whim, Perraud has been a really great player for me, with a surprising attacking bring. I have no choice to say you to try him, even just one time for fun :)

I hope you enjoyed this review, please put a like if it's the case, it will encourage me to write more reviews like that :)

Tuesday, March 16, 2021, at 7:39 PM. For the 81st time since I have him, my Romain Perraud scored. But for the first time in 450 games, my opponent asked me "How has a silver lb done that". What a nice question. And to answer him, I had to do a new review, four months after the first one. During this big lapse of time, EA released a lot of new events that would make Perraud outdated. And they were only half successful.

With 71 Pace, it became more difficult for me to put him in his natural position, at left-back. Because I still wanted to play with my favorite player, I decided to put Perraud at CDM, where the pace isn't the biggest thing. And what a decision it was! I play him in-game in a 4-2-3-1 next to Bruno Guimaraes, which have High/Med Workrate. So with his Med/High, I let Perraud going everywhere I need him, and that's what makes him so good ! He is literally everywhere on the pitch. When I'm attacking, it's common for me to see him asking for the ball in the opponent's area, and with 84 shot power, my man makes love without foreplay to the Goalkeeper, before going to get the ball in his net.

But unfortunately, sometimes he doesn't get the ball, and Perraud must return to defense. But it doesn't matter. With 87 Stamina, he could even afford to jog around the stadium during the match, his pulse wouldn't even rise. It's almost needless to say I never need to substitute him.

And defensively, I have to say that he is really great ! With Shadow, he has 82 Interceptions, 82 Standing Tackle, and 83 Sliding Tackle, which more than good tho. Is it a rocket that just stole the ball from Neymar ? No, It’s Perraud !

His dribbling is also a good point. He has 81 Balance, which means that he feels really smooth on the ball. With 3* Skills, he is able to do some good stuff, but nothing more, to be fair. If you want to do Elastico with your CDM, pass your turn.

Passing was also a con argument to put him at Left-Back. With 67 Long Passing, 1 third of long balls went off of the pitch, so I wasn’t really confident for making deep passes with him. But at CDM, it’s not really an issue. He can easily pass to my CMs or my Strikers.

What a classy player! I think he is proof that you can enjoy playing FIFA if you want to. Seriously, after nearly 500 games played with my favorite player IRL, I just only can say you do like me. Buy your favorite player of the club you support, doesn’t matter if he is Bronze, Silver, Gold, or Icon, and just play with him ! Make people knowing him, write reviews on him ! I’m sure he will be a game-changer.

Thank you for reading my review, you can read my first one if you didn’t read it yet, have a nice day and Allez Brest !