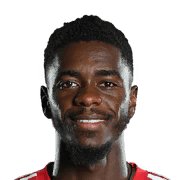 0
Red
Upcoming Matches
P. Chemistry
Squad chemistry
ST
58
RW
62
LW
62
CF
61
RF
61
LF
61
CAM
64
CM
67
RM
65
LM
65
CDM
72
CB
73
LB
71
LWB
70
RB
71
RWB
70
Reset
Basic
Sniper
Finisher
Deadeye
Marksman
Hawk
Artist
Architect
Powerhouse
Maestro
Engine
Sentinel
Guardian
Gladiator
Backbone
Anchor
Hunter
Catalyst
Shadow
Comments
Reviews
0
/600
Update my avatar Dos and don'ts
Top Rated
New
Controversial
Show comments
Top Reviews
Only logged in users can submit a review
A review must be written in English
At least 200 characters are required.
Compare this player to other similar players you have used(optional).
If you import your club to FUTBIN or send us an image with the player data(fill the form below) your review will be marked as verified.
Include what you liked about the player in the pros area and what you disliked about the player in the cons area.
Your review will be manually checked during the next 24 hours.
Chem Style Used
Formations
Position
Rate Player Base Stats (1-10)
Pace
5
Shooting
5
Passing
5
Dribbling
5
Defending
5
Physicality
5
Most Used In:
Submit Review

4.5
Tuanzebe blocks everyone, even Mappe
21 users liked this review

After the PSG game I really wanted to try him out, mostly for fun but I couldn't be more pleased. At first my friends were bugging me when I decided to switch out Aké with Axel here, but then I proceeded to get 7 wins on the trot in FUT Champs. It's pretty difficult to explain what he does in the defence, but I'll give it a shot. First of he brings pace to the defence which only someone like Joe Gomez could, but he's a 90k too much for my limited budget. My second point is that, not only does he have pace, but he also has the height that a centerhalf needs in FIFA. He is 185 cm which is 5 more centimeters than Aké and you can really feel it in game, he clears nearly all the balls coming in to the box. There's no reason not to try him. I play him alongside Laporte who brings the physical presence to defence which is also needed. Wan Bissaka also helps on that right side

Well, I was struggling in defence so i decided to buy this bloke after Nicks stream, and well. He lived up to it! You may not believe it but this man is a monster in deefence, he has good height to him and is relatively quick too, not to mention his tackling which is just stupendously good. Playing him next to joe goez, i'd say he's genuinely on par with him. Give him a shot if he fits, with a shadow he's well worth it.