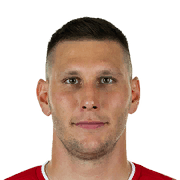 His real-life stats are currently 0 goals and 0 assists in 5 matches in domestic competition. He also received 1 yellow cards and 0 red cards.

First of all, let me say this mans pace is NOT a problem. I've used him now for 44 games and gone from Div 3 to Div 1, currently sitting at 1950 SR. I'll keep this short, he's better than any CB i've used this year, certainly the best in the Bundesliga, the only one comparable is Koulibaly. I haven't used VVD or Ramos yet.

His pace is a pro! He may some times be slow off the mark, but even the fastest players that have got in behind, Martial, Dembele, Costa, Sane etc.. get caught up by this guy. Even if he starts a yard or two behind, with a shadow chem (93) pace and his large body frame + 93 strength he will catch up to anyone knocking them off the ball.

When playing deep, his normal standing tackles obliterate the opposition, and his sliding, which I seem to think is much more effective this year is perfect.

He's also scored 4 towering headers from corners, two of them while being marked by VVD.

Stamina isn't great but for a CB it doesn't matter