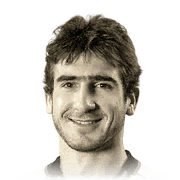 There can only be one King and he is the King

Sir Alex once said: "if there was ever a player specifically made for Manchester United it would have been Eric Cantona"

At the begining of FIFA 21 I set one goal and that was to get my hands on King Cantona and I have been REALLY lucky with packs. As soon as I had rougly enough for him I said fuck it and sold my team and almost everything in my club to get my hands on him and my god it was so worth it.

Cantona can do everything, the man is quick and strong 6´2 FIVE star skiller who can pass, dribble and finish every type of scenario infront of the goal, he is unreal.

I have been using him in alot of positions and I find him to be best in the CAM spot with two quick and agile strikers above him or as a Target man in 442/4222. I play him now as a Target man with a quick striker with him upront on get in behind and wingers on cut inside for some extra creativity.

I use Hunter on him to maximize his Pace and Shooting, I have tried other chemstyles with him but the Hunter works best on him

Yeah he is almost 2 million coins and for me that is bargain price, I think he will be more like a 3 million coin player soon when people start recognize his card in the game. 100% worth it if you got the coins

Tbh he has no flaws, but remember that a no review is worth it if there are no Cons so I will dig deep to find some cons here

Sold CR7 today, he was insane, but needed something new just because its more fun to play many different cards over the year. Knew it would be hard to get a card that is significantly better than CR7 as ST next to my untradable Neymar for this amount of coins. But this card is really worth every single coin. He's just good at anything. I'm a Division1 player and all 15 matches we're Division1. This guy scored 32 goals in 15 matches and assisted another 14. I got 10380 Points out of 15 games, thanks to Cantona. I play a Hunter on him, because he really needs the pace and the finishing in a ST position. Just like CR7 it feels like he had 5 star weak foot. He even scores long shots with his left. I would go as far to say his heading is better than CR7s. His passes, especially the long ones are out out this world, perfect if you have another striker who is as fast as neymar. 2100k is a lot of money, but if you have them and struggling who to get for the money, get this man!

Could be a little more agile, but come on, he has 89 strength

I got him from the base Icon SBC. I was so excited to use him but was a bit disappointed after the first 3 games playing him as a CAM in 4-2-3-1. I changed to my other favorite formation the mighty 4-4-2 (2) and played Cantona as a ST partnering Son. He was a man possessed ever since! His shooting is out of this world, almost every shot from every angle imaginable is a goal, he assists a lot of goals for Son as well.

The key here, other than his incredible shooting, is his tremendous strength. Give Cantona the target man instruction and let his partner (in my case Son) have the get in behind instruction and enjoy a world of lovely 1-2s and clinical finishing. His passing is absolutely crisp for a striker while his dribbling, although not agile like the small dudes, is very effective. Attacking Headers from corners are like taking penalties with this man, 65% chance for a goal or more.