Ok, that's my first review so don't kill me if I'm not good enough at writing these kind of things.

I'm not english too, so there might be some gramatical errors.

PACE = Ngl he's not able to outrun most of the defenders in this game, but his pace combined with his body type allows him to get past the defenders the 80% of the times because of his strenght.

SHOOTING = He's a godly finisher with both feets and he has an incredible positioning, he's always at the right spot, his shot power sometimes may be an issue but if you shoot in the right direction it will always be goal because of his op composure, no cap.

DRIBBLING = He hasn't a godly dribbling, mainly because of his agility and his body type, he's 6'1'' and sometimes he might feels clunky and slow, but that 4* skills helps him a lot and allows to get past the defender if you're a good skiller, I recommend using the berbatov with him when he's near the net, I've scored at least half of his goals in this way.

PASSING = He's definitely not a good passer, use him as the main striker with a good passer behind him (I used Joao Felix with engine as cam). Obviously he's able to pass him at a near player, but do not try long passes or crosses if you don't want to give the ball to the opponent.

PHYSICALITY = He's just perfect, his stamina isn't as bad as it seems, he lasts until the second part of the ET for me. His strenght is something else as I said before and he ahs the perfect body type too, just brilliant.

-Bodytype (may be a con or a pro, it depends on your play style)

-Pace (it always depends on your play style, imo he's a decent pace but it could be better) 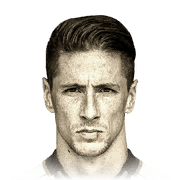 Im not sure where to start doing this review honestly. First of all Torres is my childhood hero, and has been since I was a little kid watching him winning the Euros in 2008. I was very gassed when I saw EA finally gave him an Icon, and cause of that I had to buy him as soon as possible. I had planned to buy his middle icon, but I just wanted him now, so I decided to buy his baby icon, despite not having great stats ...
Read full review

At first I'm portuguese so my english is not that good. I packed him at a guarenteed base icon and at first I was disappointed. And when I played him in 4-2-2-2 I didn´t like him.But then I tried him in 3-5-2 next to El Shaarawy and he is a beast. He scored 10 goals in 5 games
Read full review

So, I got this card from icon pack and to be honest, I was so disappointed, since I thought it is going to be Butragueno. Either way, he went straight to my main squad. But now, after 38 games, I´m not happy to say that this guy is not that good as I thought he would be.To be fair, in his first 10 games, I was very happy wi...
Read full review
0
/600
Update my avatar Dos and don'ts
Top Rated
New
Controversial
Show comments