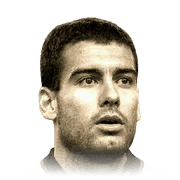 i've used this man for 20 games so far and i think he is one of the most underrated icon cvm's in the game, and why you may ask? because this man's defence is so good, i think he is one of the best tacklers in the game. his standing tackles are so good. its on vieira and mathaus level.also he hase 78 pace but with the shadow he keeps up with most attackers, he also doesn't look very agile but i actually don't ...
Read full review

A Genius on the pitch

At first, i just bought it for the chem, and then just buy a better icon, but after i tested him in the weekend league, he surely will stay on my team.I thought he is so cheap because he will not be good in-game, "maybe the stamina, the pace, and strenght" are poor, but in-game, he didn't feel like that...
Read full review

Yeah... I got him out of my mid icon pack.Gotta say I wasn't TOO disappointed at first cause he looked okay.I'm a div 2 gold 1 player and I have to say this card is lackluster, in this stage of the game his stats don't hold up and he's gonna bring you more bad then good.Not really his fault and his prime might be a tad better then this one, but the mid just lacks the stats in the right areas to even be ...
Read full review
0
/600
Update my avatar Dos and don'ts
Top Rated
New
Controversial
Show comments