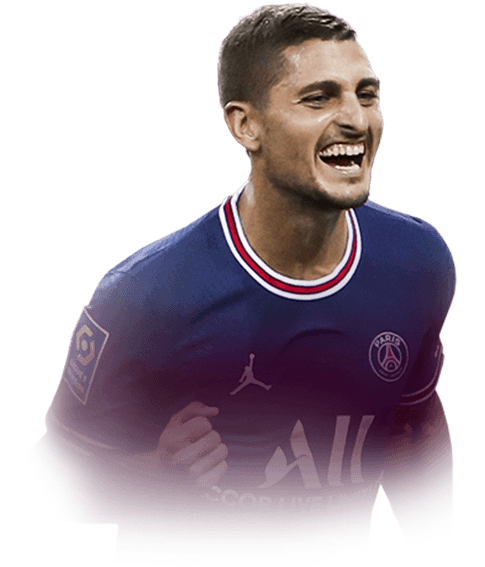 His real-life stats are currently 0 goals and 0 assists in 8 matches in domestic competition. He also received 3 yellow cards and 0 red cards.

Im just going to get straight to the point, i personally think this card is INSANE! He is so agile and he is really fast for his stats. Not fast for running down the wing, but explosive for getting out of areas in the midfield and his dribbling is on the level of Messi, Di Natale, SIF Vini. This card is a breath of fresh air in the midfield, i would 100% recommend this card if you can fit him in your team. He remind me of Kante, but better!

Shooting but still can finish in the box

This card came out and the first thing I thought was "Kante". The 5'5" plus the unique body type... this guy is built like Kante! For some magical reason, these defensive mids feel 20 overall more than their actual pace. Now, Veratti is not Kante's speed, but it was adequate, to say the least. He can catch up to most players. Like Diego Lainez's future stars last year, having acceleration that is much higher than the sprint speed gives a deceitfully low overall pace; they're always faster ingame. The 95 aggression and the 90 jumping surprisingly made Veratti win most balls in the air despite his height. He closes down like Kante. His passing, although lower than his base card (I mean u can't really compare those cards together, his base is unusable), was fine. He's able to distribute up and down the pitch and to the wings. The strength can be felt. It's so weird for such a little guy to knock the big boys off the ball (he even out-physiqued Inaki Williams!). The shooting is actually not that bad, u can just pass into space right in front of him and he'll run onto the ball with a powerful one-touch shot reaching the top corner. Hidden finesse shot kinda? I was tempted to put a Hunter on him but I didn't really feel like wasting the money. And the dribbling. Oh my. This man on the ball is so smooth. With this game's emphasis on left-analog stick dribbling too... plus the 4-star skill moves... this guy is (generally) defensive but can move just like (and I daresay, perhaps better than) inform Vinicius. In my opinion, if you have the coins and have a Ligue 1 team, this is a must-do. Link him to Tchouameni or Gini or Mbappe... or maybe if you have a Serie A team you can easily incorporate him in with links such as Politano and Barella... Anyways I love this card lol

Strength is not bad for a player his size

Shooting is not his biggest strength but it's quite nice

The Italian Kante, he is amazing on the ball. His driblling feels like Messi and his passing is class.

Played him in Div 2 enroute to Div 1 with 8 chem and he does bits at CDM replacing Llorente.

I have tried Kante and overall he feels better as he is more complete. His pace is not a problem as he is small and doesnt feel sluggish or slow at all with shadow.

His side to side jockey when defending is nice when opponents try to left stick dribble through your defence and he links to Kimpembe, MArquinhos or Hakimi nicely.

Do him, you wont regret it! He is 1/4 of Kante price and you can also have a Serie A hybrid if you want to.

Shooting but he is a primary stay back CDM.

I'll try to make this review as short as possible. Verrati is a player I admire IRL because of his playstile so this kinda was a no brainer for me.

Played many games already with him and despite the 72 pace he feels way faster, a dribble god, great defending, intercepting beast. If you're like me that you like to try players out of the meta and enjoy new cards, don't think it twice.

The aggression and strenght makes Verrati feel so good, moves out of the ball most of the players, and personally I like my midfield to have high dribble stats. Shooting is bad, but besides that and height, hes the second best CM I have tried this year after Kante. I run him with shadow since most of the times he's my CDM.

He has good passing but don't expect to him to send 50 yard lob balls and get it right. Overall such a awesome card for what I think is really cheap (124k when I did it)

I completed rulebreakers verratti due to me liking his original gold card, even without the pace so with a +8 pace upgrade on this card, including the +21 physical I had to try him out, and he did not disappoint, his passing although the downgrade (I used a catalyst) was amazing and the dribbling is next level, the only real shame is that due to the below average pace and shooting I wasn't able to run further, which is where this card lacks and maybe why the SBC is seen as worth the money. Despite this, the card itself for what it's supposed to be used for is amazing,4* skills on a midfielder is great, the week foot is unnoticeable (maybe when shooting but I haven't tried) and the high defensive wr is great.

Passing (despite the downgrade but use a catalyst)

Dribbling, he is the best on the ball player I have used in a long time even compared to mbappe

Defending is solid for a midfielder with good interceptions and good tackle stats, you couldn't expect any more

Pace (what else would you expect on a verratti review but it's still better than previous cards, however he doesn't seem to be outpaced when trying to defend against pacy wingers)

Shooting (if you want him to come forward then don't expect him to finish from outside the box, maybe inside the box he is somewhat reliable but I haven't been in that position)

First off i must say, one of my favourite cards this year... a lot of people may have passed up on this card but as i was lucky enough to pack an untradeable Messi at the start of Fifa i decided to invest in Verratti when he dropped. I have now played close to 300 games with him and not a single complaint! Great CDM feels like a greater kante in a way.