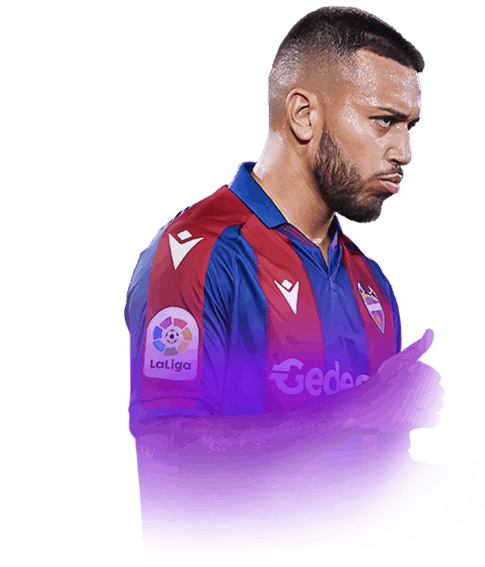 Rúben Miguel Nunes Vezo's FUT BIRTHDAY card is rated 87, he is 183cm | 6'0" tall, right-footed Portugal defender (CB) that plays for Levante UD in LaLiga Santander with Med/Med work rates. His average user review rating is 2.5 out of 5 . He has 2-star weak foot and 5-star skill moves, giving him the ability to perform every skill move in the game. He does have a real face in-game. He has been used in 4,867,729 games with a GPG (goals per game) of 0.015. Rúben Miguel Nunes Vezo has 1 special cards with ratings between 76 and 87. The best chemistry style for him is SHADOW. He was born on 25-04-1994 and he is now 28 years old.

His real-life stats are currently 0 goals and 0 assists in 6 matches in domestic competition. He also received 2 yellow cards and 0 red cards.

Allright so, as lame as it seems, I am a levante fan. Yes, levante. Anyways, I knew that I had to put this card in my starter team as soon as I got him in my Team 1 pack.

So far, he has been reall decisive in my last games, and has made a huge impact in my defense.

The stats don't lie. His pace is good and with a shadow or an anchor, he can catch up to fast strikers like correa potm, or ben yedder. So far, his pace has made him win his place in my squad, and I don't think that this stat is a big problem. In general, pace is really good.

I mean, what can I say, 5 SKILLS!!!! Apart from that, his agility on and off the ball are outstanding, which help a lot when he has to turn around and start a run against fast strikers.

Enough passing to connect with mids and start the play

He is a secure center back. When he has to steal the ball in a fast situation, he barely misses to snatch the ball from the attacker, and that gives players confidence, making them know that their defense is unbreakable.

This card has surprised me so much, bumping into tall atackers and bringing them down. He has clearlyy shown that either the player goes through, or the ball goes through, but never both, which is crucial in a defender.

In conclusion, I recommend this card for whoever is looking for a fast LaLiga cb. I know that there are similar cards for a lower price, but ingame, I'm 99% sure that Ruben Vezo will outperform those cards.

Thank you, and, if you found this useful, please leave a like.

If I had to say something, it would be that ingame, this card might be too short to intercept in the air, but it's barely noticeable.