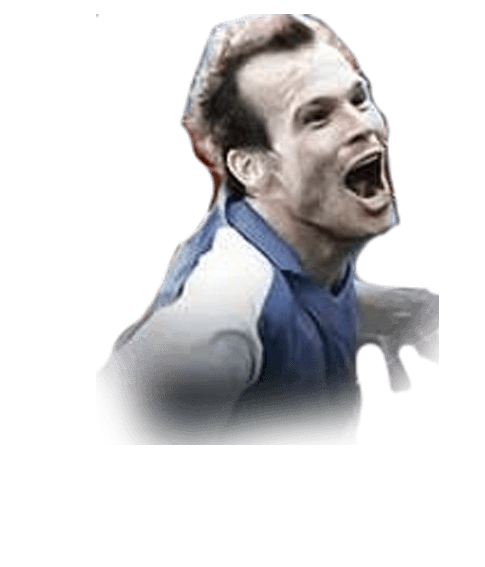 I am always up for new and unique cards and the Club Hero additions certainly had my attention when their release was announced.  There are so many intricate ways to work these options into a squad and thankfully Freddie Ljungberg offered the opportunity to do just that with my Isak dilemma going into this past weekend.  Additionally, having only used Abedi Pele and Lars Ricken in a recent draft I was itching to give more of them a go early in the cycle.  One thing that was clear when using both Pele and Ricken was how well they performed compared to their statistics.  In my brief experience, there is something special about these cards and their abilities to outperform their statistics… and thankfully Freddie Ljungberg was no different.  While the majority of Ljungberg’s success during his career came out on the wings, it was the center of the pitch calling his name this weekend as the middle CAM in my 4-2-3-1 formation.  While I tossed around the potential use of an ENGINE chemistry style given the demands of his position, I couldn’t have been more pleased with the decision to go with the added pace of a HUNTER.  Ljungberg was the savior all weekend long in the following squad: 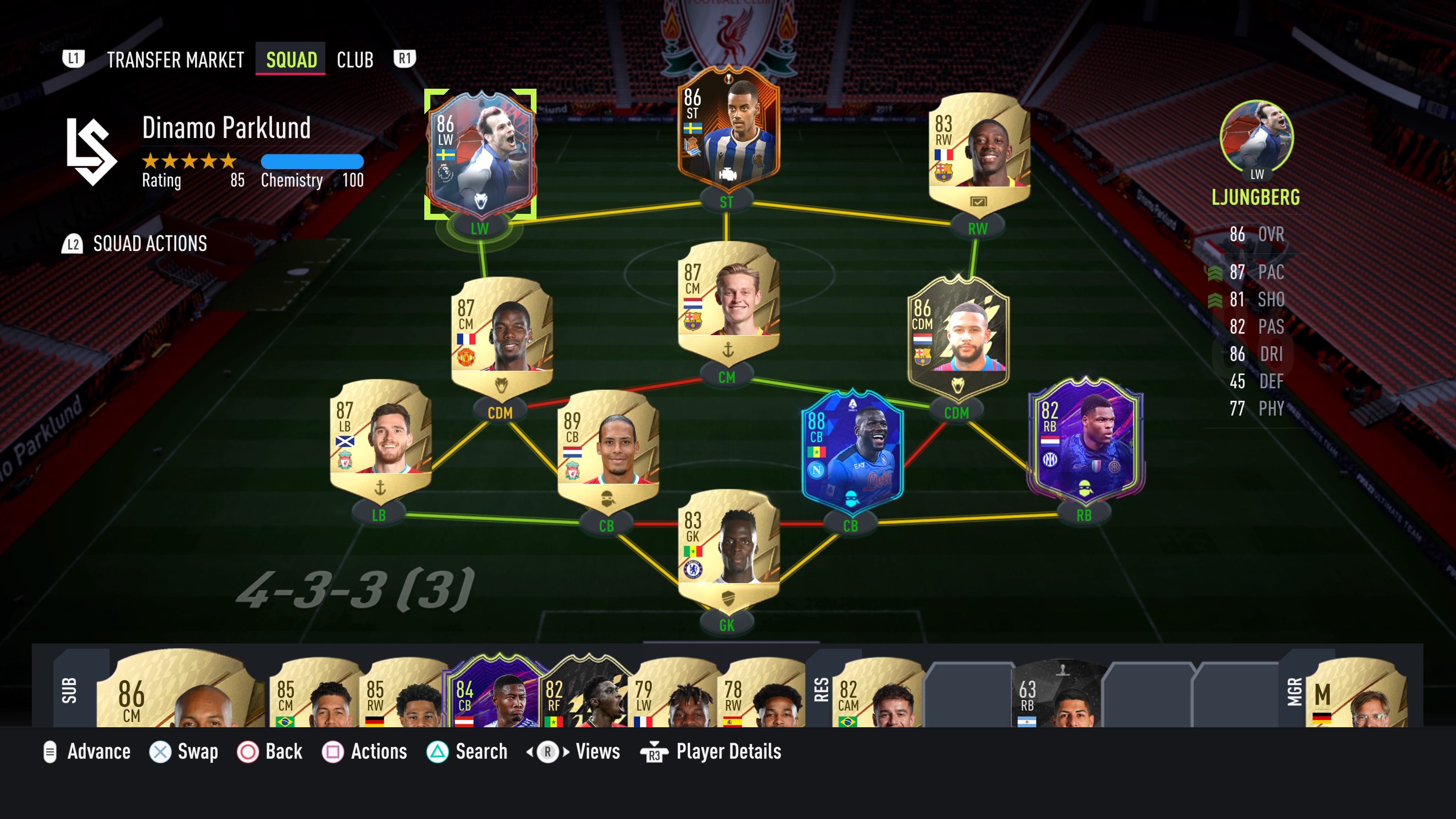 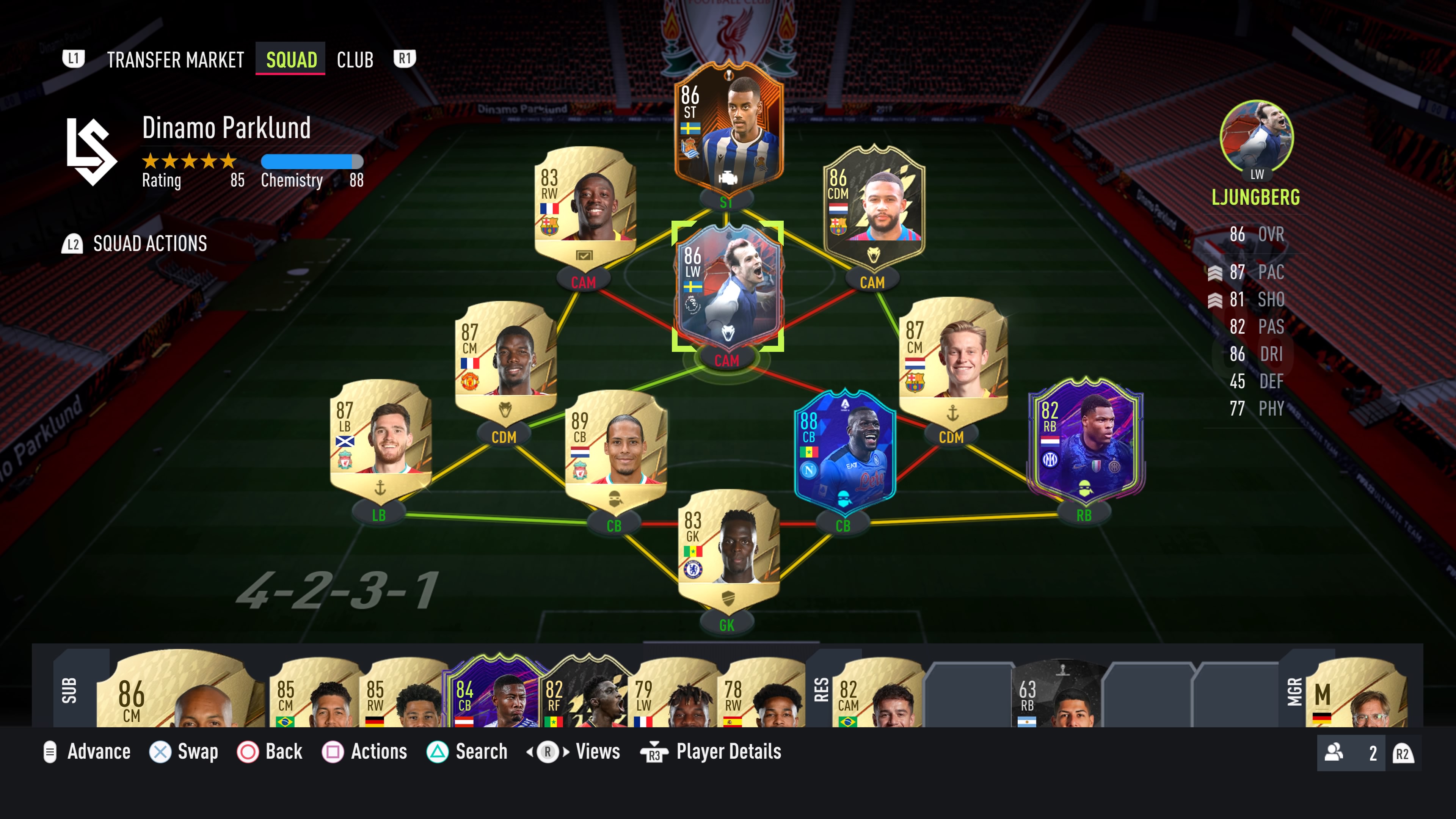 20 goals and 7 assists in 15 matches from a deeper role is definitely the best performance I have witnessed in FIFA 22… and with that, it also marks the best rating we have given out as well.  While Mané was dynamic in ways Ljungberg was not, there is simply no replacement for delivering on the big stage.  It is worth noting as well that Ljungberg would have likely had even more assists had Isak turned out to be the player we expected when he dropped.  The card is incredibly well-rounded and it was a struggle to find anything bad to touch on for this review.

This card was not quite the same as Mané on the ball, yet the two of them are fantastic dribblers in their own right.  That is what I am enjoying most about this FIFA, there are just so many ways that players can be effective without being carbon copies of each other.  While Mané feels agile and quick… Ljungberg felt powerful and graceful… yet both caused infinite problems for defenders they come up against.  It was as if no one told Ljungberg that he only had 84 AGILITY & 80 BALANCE as the Swede pulled off twists and turns that turned defenders into jelly inside the box.  The added bonus to the hidden dribbling was the ability to choose a Pace focused chemistry style, with the movement to 99 ACCELERATION & 96 SPRINT SPEED proving difficult to handle for opposing CM’s & CDM’s in the middle of the park.

While the dribbling and pace caused the problems, the skills and talent are worth nothing without the finished product. Thankfully the finished product was often not far behind as Ljungberg’s 4 STAR WEAK FOOT was as close to perfection as I have felt.  The combination of the 96 FINISHING, 84 SHOT POWER & 78 LONG SHOTS seems nothing short of average but for some reason performs as if it was prime Suarez.  I couldn’t believe the variety and quality of finishes that I witnessed this weekend as Ljungberg posed the biggest threat in my squad by far.  I would say that the 78 LONG SHOTS is maybe the smallest weakness as the majority of the goals came in and around the box in the end.  A small feature, but could have pushed this card over the edge to a perfect 10/10 shooting.

The bottom is falling out of this market worse than Barcelona under Bartomeu.  The influx in rewards from the no loss glitch continues to have adverse effects and even the Heroes were not exempt from the carnage.  While Ljungberg is not way down like some of the other options… It is sadly down 45k from when I bought it and he is still currently in my squad.  While I am sad about the wasted coins, the reason he remains is the continued returns that he produces game in and game out. Easy qualification back into Weekend League and an improving Div Rivals rank can all be largely attributed to the performances of this man… and for only 130k he could do the same for you.  89 POSITIONING, 83 VISION, 79 COMPOSURE, 84 SHOT PASSING, 75 LONG PASSING, 74 STRENGTH, 86 STAMINA… all of these should be in the “bad” or “could be better” column… Yet all of these areas perform much better than advertised and I have no idea why.  I assume based on experience that the Hero cards have hidden statistics that allow for better results, and if not, no one told Ljungberg who continues to perform lights out in my squad.  Maybe just maybe he could be stronger on the ball when tackled, but I really don’t have another bad word to say outside of that.

I love the performance of this card.  I love the feel.  I love the fact that you can build some truly intricate squads with these Heroes.  And I love for all of you that he is only 130k.  This was truly a fun and eye opening review to complete and makes me want to continue exploring the variety of Hero cards as best and as early as I can.  Please let me know in the comments who you have tried and if the experience has been the same as I am generally curious now about their performances across the board.  In the end, it is a must-try from me, unleash him in those CAM areas and watch him work his magic.  Hoping you are safe and well.  Cheers for reading. 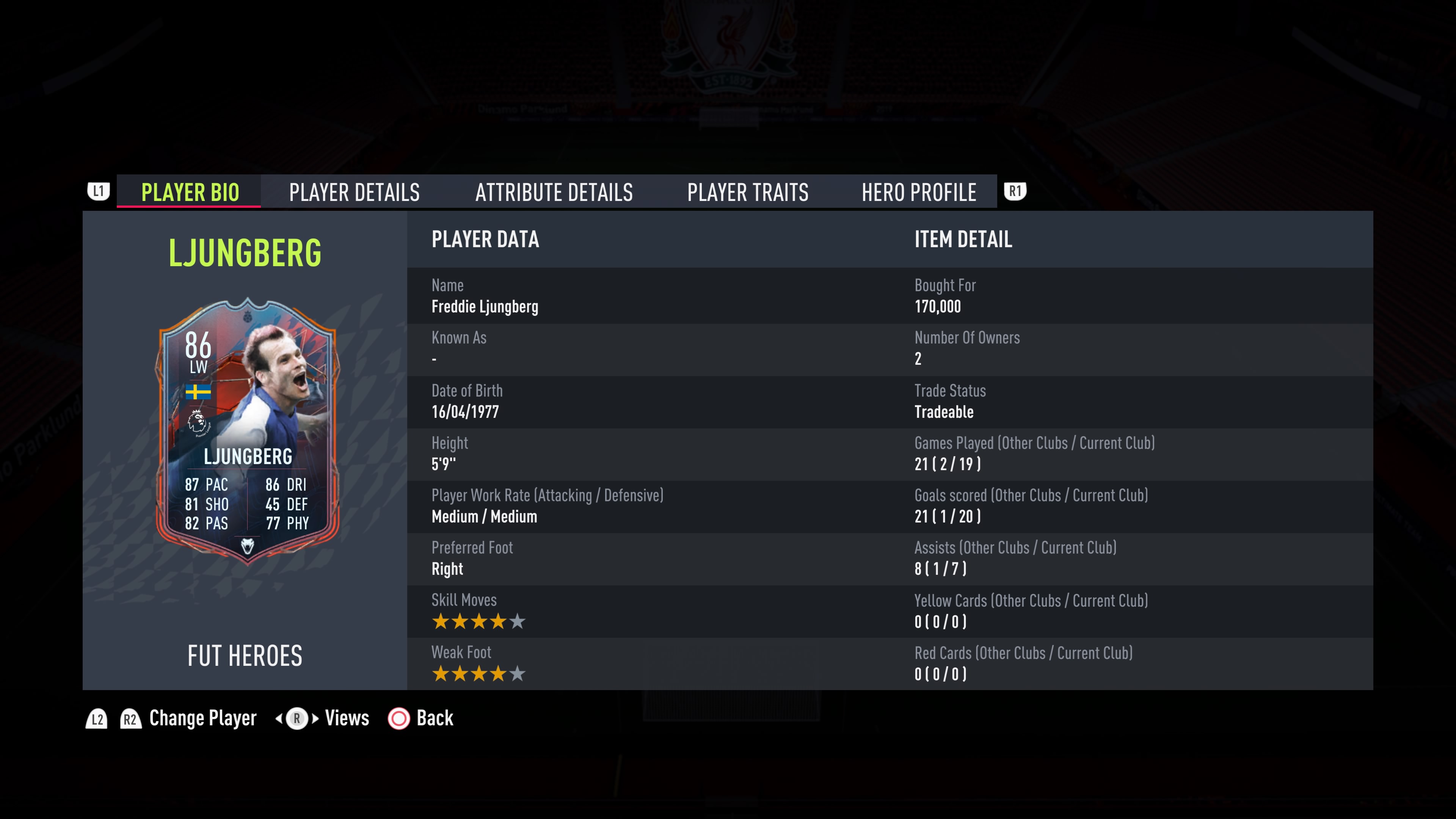 Don't usually write reviews as don't know who actually reads them, but if one guy reads this and buys him off the back of this, then I'm happy. This guy is a god, had Mane for a bit but like to keep it fresh and saw Freddie was dropping a bit so took the 160k plunge which is nothing for what this guy offers, shiny links to Prem which Mane doesn't offer so I could fit Fekir in on 10.

Pace - Off the mark with a little ball roll and push forward, he's gone, even the Hakimis of this world had trouble keeping up with him

Shooting - Shooting from all angles he was finding corners, inside and outside the box, low drivens are this guys bread and butter, pushes the ball side netting every single time.

Passing - Didn't do too much long range passing with him but his 1 2s are very handy and found the man every time.

Dribbling - Feels so good on the ball anywhere on the pitch, got the sticky touch in the box as does Fekir making him a menace to play against.

Finished with 17 goals and 12 assists WL from the wing, bagged more than Aubs.

I was very impressed by the capabilities of this player. For 17.5k, you can have 97 pace (with a hunter chem style applied), a green link to any prem player, along with a solid midfielder. I personally strongly recommend this card if you have a premier league team. As I said, this player green links to any premier league player so if you lack chemistry, then this player just might make up for it.

I absolutely HATE the jumping on this card. 9/10 times he fails to win the ball

This guy... Tbf, I got him in my hero pack and was devastated. Went into a game, he scored once, I said luck, twice, well fine, but the third goal led me to understand this card was something else. He is agile, fast, skilfully and has great finishes with both feet. He never let me down and always scored in the last seconds to save a qualification position in the champs. He might look slow but is fast af. If you are freaking poor and looking for a great prem LW else than that shitty rashford go for LJUNGBERG!

Dribbling - he is like a midget, gets the ball and just goes past through defenders. just push the left stick and watch the magic

Passing - it's not top class but can give important clucth passes