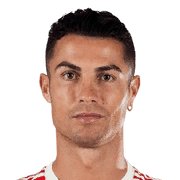 Cristiano Ronaldo's card is rated 91, he is 187cm | 6'2" tall, right-footed Portugal striker (ST) that plays for Manchester Utd in Premier League with High/Low work rates. His average user review rating is 3.7 out of 5 . He has 4-star weak foot and 5-star skill moves, giving him the ability to perform every skill move in the game. He does have a real face in-game. He has been used in 65,637,508 games with a GPG (goals per game) of 0.892. Cristiano Ronaldo has 10 special cards with ratings between 91 and 99. The best chemistry style for him is HUNTER. He was born on 05-02-1985 and he is now 37 years old.

this year i opened a lot of packs during EA Play so that i had the chance to buy Ronaldo really cheap. I had to decide between him and Mbappe and chose him. I love to see him back in the United Jersey!

I think he‘s one of the best players for this years meta. He‘s fast, agile and tall. His pace downgrade balance is no big deal. His attacking positioning and Runs are just phenomenal and almost every Shot is a goal. After almost 27 Rival-Games i have to write a review:

He is very fast and can outpace almost every defender, but you will notice the difference to players like Adama. The pace downgrade is no big Deal!

The best finisher in the game. Almost every Shot hits the net. His attacking runs are another Level.

His dribbling is really good! He is very smooth. 5* Skills makes him even better.

Excellent passing for a striker.

His physicality is phenomenal. He can push off most of the defenders. The biggest pro is his jumping + heading in this years meta. He is a cheat after corners!

I did not defend with him

I think CR7 is besides Mbappe the most complete Player in this Game. He is veeeeery expensive but if you have the coins to buy him, DO IT!

The fact that he's downgraded is outrageous. He carried Juventus, scored 29 goals in Serie A, won Euro 2020 golden boot, and etc. He is the same rating as Mbappe and lower than Lewa, Despite EA's stupid choice, he is still a beast in Fifa 22. Played him in 10 games, scored 27 goals for my team. He is amazing.

Pace: With the Engine chem style on him, he is fast. Not Mbappe fast, but still fast enough to outrun my opponents.

Passing: With the engine chem style on him, he is a good passer.

Defending: Obviously bad but he has 90 heading accuracy so he can score with his head really well.

Physicality: Aggression not good, but he has 95 jumping so he is an amazing header. Strength 77 feels like strength 90 cuz he is strong and tall, and stamina a small problem but doesn't matter cuz he is still a beast even if he's tired.

Defending, aggression, and stamina (a little)

HE. IS. INSANE. His shooting is from another planet. WIth the crazy keepers of this game, he is still banging goals left right and center. Most chances are goals with him. His volleys are amazing, from both feet as well. Long shots and headers also crazy. Powerful driven shots are insane with him also. His pace isn't as good as other years, yet he can still hold his own and still shows flashes of great pace. He definitely is not slow. His passing is really accurate, almost all of his through balls are pinpoint accuracy. His dribbling is exactly what you expect from CR7, really in control, agile and turns nicely. He is no Messi with dribbling, but he is so hard to tackle off of the ball, and the skills are essential to his dribbling. Very physical due to his stock in game and him being 6'2. Overall he is insane as every year, absolutely no issue with him, except maybe stamina. I only played division rivals, so I haven't used him to extra time, so he may burn out by extra time, but for rivals, his stamina is good enough.

So hard to tackle

Price will always be a Con with CR7

Pace at the later stages of the game

In bad gameplay sometimes he feels a little bit clunky

Ronaldo is a game changer, if you have the coins to get him, you should not hesitate. He is a very complete striker, he seems to consistently score screamers and has really amazing bursts of pace when it really matters if you time it right with a triple sprint or timed sprint. One key thing I noticed as well, he intercepts really excellently in the attacking third, I checked the interceptions post game and a lot of the time they were at the highest for my team, this leads to lots of goals on top of open play.

I am reviewing today Cristiano Ronaldo, I am playing on PS5 in Div 1

Cristiano is the best Striker I used so far. Feels quick, his reactions and touch is great. I played him last weekend league and whole week in Division 1 in Rivals and WL Qualification and I don't agree that he's useless against better players, comparing the price he is the best striker in the Premier League and for sure IMO best striker around 1million coins. 5 star skills and 4 star week foot are very well and helpfull in cuttin in inside the box and scoring as CR7 does not have problem scoring from anywhere. His weaknesses in my opinion is Pace when he needs to outrun fullbacks and strenght which is fine based on statistics but he does get pushed away by stronger CBs such as VVD or Kimbebe but who doesn't.

I simply love CR7, so thats why i play him.

For me he is unbelivable.

I played him with an Engine besides Fekir in the 4-2-2-2 Formation.

I will never sell him.

So, I finally decided to pull the trigger and get CR7. I was ecstatic to say the least. Boy oh boy was I disappointed.

Since the latest patch I found him quite sluggish on the ball, he was getting pushed off the ball like a 7 year old in the park by any and every defender I came up against. His finishing was by far the most disappointing part... left foot. right foot, finesse, chips, power shots all inside and around the box and barely a quarter would go in. It's almost as if his shots are magnetised to the post and crossbar. I genuinely couldn't score, it was so bad to the extent that the chances he missed would cost me champion games that I should have been winning.

Pace ( 6/1) He's fast but against the current meta of defenders couldn't get past any of them. His acceleration is far too slow for the player he is.

Shooting (7/10) He occasionally has that CR7 spark and turns a nothing chance into a goal. But I found when it came to simple or easy chances he simply wasn't finishing them.

Dribbling (8/10) One of the only good things about this card for me was his dribbling. Very smooth and silky, can drift past players but is easily pushed off the ball 5* helps

Passing (8/10) Decent for a striker. Nothing special.

Physical (6/10) Gets pushed off the ball like he's a sack of feathers. Especially against meta defenders (Kimpembe Varane etc). It was the most frustrating part of the game for me. His heading and jumping is on another level which can be useful.

I think there are genuinely many better options for half the price out there. Overall really, really disappointing card.

Well first of all I dont want to sound biased because he is Ronaldo. Tbf he is my goat tho. He wasn't as good as I expected. His agility doesnt seem bad on paper but on the pitch is really not that good. Also he is tooo slow at this point in the game. He might not be in lower divisions, but in div 1 I struggled with him at striker position, he got outshined by mane.

I understand why people buy him because he is Ronaldo. He is just so 50/50

Dribbling is alright not good

I always had the feeling that cards feel different, according to the account you play it with.

But now i am 100% sure! I loved his cards over the last 4 fifas, even the cr6 one from last year and I was verry glad after I packed him untradeable.

But this year he was so freaking horrible for me.

He missed everything, couldn't dribble and felt extremely slow. I played him over 100 Games and tried every offensive Chem Style, but every game he was an auto-ball-loss.

Like for real, he single handedly ruined two WL for me.

Trust me, i wouldn't believe it either, if i hadn't felt how bad he was.

So yea. Maybe he's good for you, but i am not the only one who thinks he is trash this year, so my advice is:

I have used Ronaldo for over 2 weeks now (got him in an untradable pack) and all I can say is that I miss the old Ronaldo from FIFA 16-21. This year he is completely washed. He can't run properly and is really weak. I have tried him with hunter and with engine but I think hunter is better because of his pace downgrade. In all of my Weekend League games he probably missed 1/3 of opportunities Mbappe would've scored. It's a shame what EA has done to him now...

Also other players jump higher than him on corner kicks. Is EA watching football? This downgrade makes him unplayable and I wish I would've packed Mbappe instead.