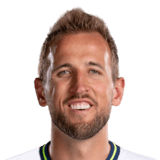 His real-life stats are currently 16 goals and 1 assists in 21 matches in domestic competition. He also received 4 yellow cards and 0 red cards.

I've never been a fan of using "Clunky" strikers and always tried to use agile strikers with pace in previous Fifa's.

But with this game being slower and pace seeming to make less difference, I thought I'd give Kane a try due to his great shooting stats and physical presence in the box.

Firstly, his shooting his ridiculous really. If he gets a chance in the box then he takes it 9/10. His passing is strong too so he's good at linking play and creating chances for team mates.

Obviously the issue is his pace and you do have to play a different style to make it work.

When going in the first game with him I did not expect much of him, because I didn´t really enjoy him over the last years all that much. But with the new lengthy running style I could immediatly tell that this year would be different.

With his great top speed and good strength he was hard to get off the ball and paired with his great runs he was just very nice to play with and easy to get into the front of the goal where his good shooting does to rest.

With all that being said there are still some little drawbacks, with the agility maybe being the biggest one, tho for mir it was not that bad at all but maybe someone else would feel different.

Furthermore because of HIGH/HIGH work rates his stamina could get low at the end of the game so keep that in mind.

All in all I can safely say that he is a nice striker this year and that I can recommend him to everyone.

- Maybe Pace when starting to accelerate

Since I play UT only casually, I try to use untradeables only and Kane is one of them. I played a while with different forwards like Ronaldo, Solskjaer, Haaland, Füllkrug, Nkuku and many other players, but Kane was nearly the best for my other ST, Hero Gomez. I use him with a Hunter and his strongest ability is his 5* weak foot (imo). He is not that fast, but when you pass the ball at the right time, he will create some space and can score goals from every angle in front of the goal. I must say, if I had don't packed him untradeable, I hadn't use him, but I'm happy that I did and I really like him.