After managing a colossal 19 correct predictions last week we enter this week with an extremely difficult week to predict. With TOTY just around the corner, we potentially have a strong side with several strong players to choose from, including Alisson, Ben Yedder, Muller and Insigne. 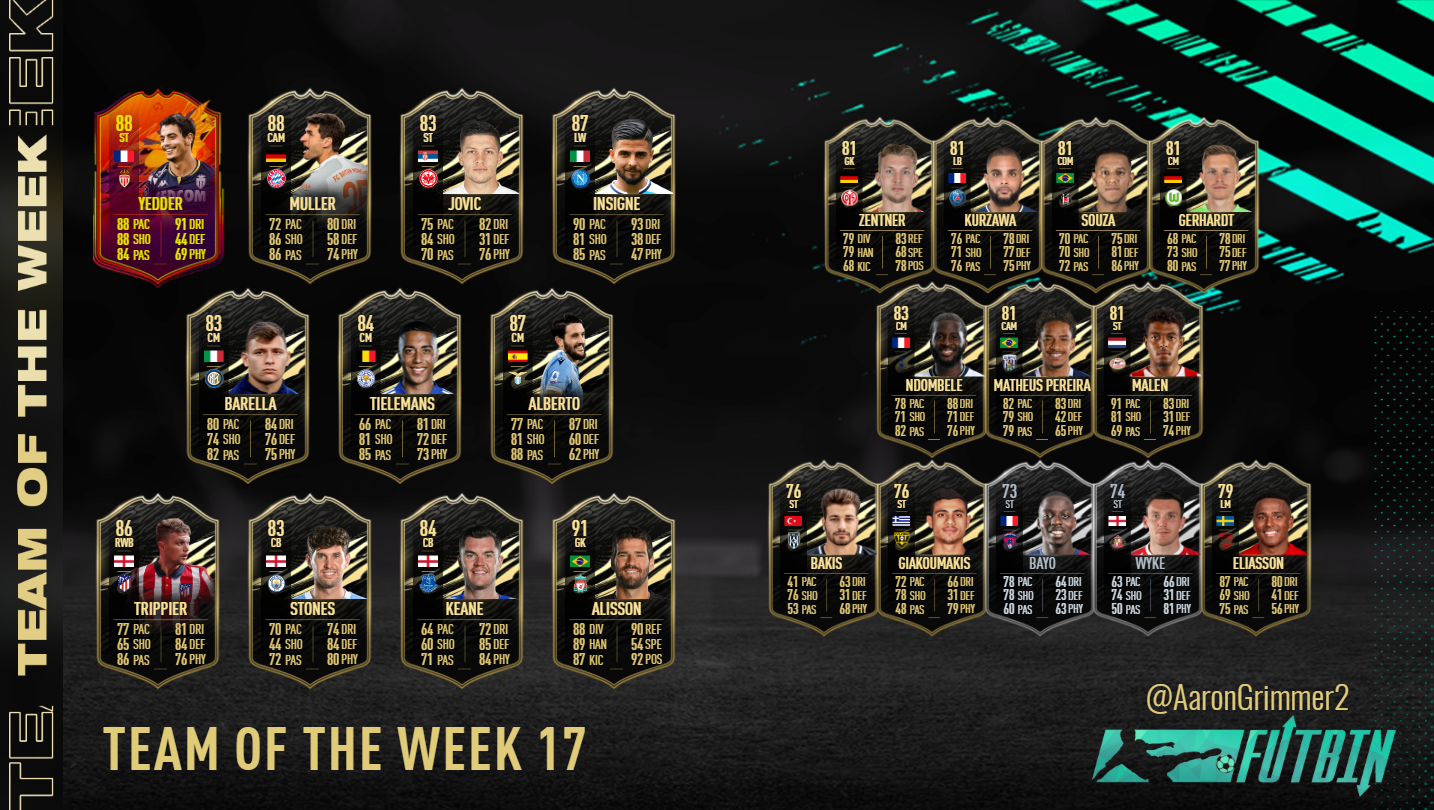 Alisson – GK - OVR 90>>91
With Neuer looking more and more likely to be named keeper in TOTY this year it allows Alisson to sneak into TOTW. We have seen it on numerous occasions where EA has forced players into TOTW of whom have narrowly missed out on TOTY. That being said Alisson was a strong shout regardless after being named MOTM in Liverpool’s 0-0 draw with league leaders Man United. The Brazilian made four saves in total to keep his sides clean sheet, keeping them in the match.

John Stones – CB - OVR 80>>83
Pep has shown a lot of faith in Stones as of late and it has been justified with several brilliant performances from the Englishman. He added not one, but two goals to his game on Sunday against Palace as City went on to record a comfortable 4-0 win. It will be a difficult call for Pep once Laporte is back to full fitness with the way both Stones and Dias are performing.

Michael Keane – CB - OVR 78>>84
Another English CB now with Keane after he scored one of Everton’s two goals during their 2-1 win over Wolves on Tuesday. A result which at the time meant Everton entered into the top 4. Keane was then awarded MOTM for his performance and in a week, which saw two sets of Premier League fixtures taking place there is actually not many options from the division. Making Keane very likely.

Kieran Trippier – RWB - OVR 83>>86
With just two La Liga games taking place this week due to cup fixtures I can see a player from the division being forced in for the sake of it and there is only really one option for that. Trippier supplied the assist on one of two Madrid goals as they went on to record a 2-0 win over Sevilla.

Lorenzo Insigne – LW - OVR 85>>87
One of the easiest selections of the week came with Insigne after he bagged himself two goals and an assist during Napoli’s 6-0 romp of Fiorentina. Along with a few others he picked up an 8/10 from Gazzetta, naming him among those who could be named POTW.

Youri Tielemans – CM - OVR 81>>84
You only have to watch Tielemans to see just how talented he is and at just 23 years old the best is yet to come. He has developed into one of Leicester’s main players over the past couple of seasons and put in a superb display during their 2-0 home win over Southampton. Providing the assist on Both Maddison and Barnes’s goals.

Nicolo Barella – CM - OVR 80>>83
Juventus are well are truly playing catch up with it looking more and more like Italy are going into a new era after Juventus have dominated for so long. This weekend saw Inter record a 2-0 win over the old lady, putting a 4-point gap between them. Barella was involved in both those goals, scoring once and assisting the other. A performance that saw him pick up an 8/10 from Gazzetta.

Luis Alberto – CM - OVR 85>>87
Lazio recorded a routine 3-0 win at home as they closed the gap to the top four to just four points. Both Alberto and Lazzari impressed with both picking up an 8/10 but it is the Spaniard who seems to more likely of the two to be selected for me after he scored two of those three goals.

Thomas Muller – CAM - OVR 86>>88
Despite not predicting him myself for TOTY I was very surprised to see that he was not even nominated for the side after what can be classed as a brilliant season for a highly successful Munich side. That being said he does now look set to pick up his second IF of the year after recording both a goal and an assist during their 2-1 win over Freiburg this weekend.

Wissam Ben Yedder – ST - OVR 84>>87
We have already seen one headliner upgraded in Hinteregger, but we are now about to see a much higher profile one as well. Ben Yedder was heavily involved in Monaco’s 3-2 away win over Montpellier scoring two of their three goals. He almost secured his hat trick, with the woodwork denying him. Despite that, I still expect to see the striker in TOTW 17 and by looking at his price so do many others.

Luka Jovic – ST - OVR 80>>83
After failing to impress over in Spain for Madrid, Jovic made the return to the Bundesliga to play on loan for Frankfurt. The Serbian striker equaled his goal tally for Madrid within 28 minutes as he scored a brace to help secure Frankfurt all three points via a 3-1 win over Schalke.

Robin Zentner – GK - OVR 75>>81
There were a couple of keepers which I could have picked for this spot but with L’equipe still, on strike I opted to go for Germany’s keeper of the week instead as I feel it is safer. Zentner made a total of six saves as Mainz managed to hold out for a 1-1 draw with Dortmund. Meunier is an option from Dortmund but with Zentner claiming MOTM he makes more sense for me.

Layvin Kurzawa – LB - OVR 77>>81
With L’equipe still on striker Ligue 1 becomes extremely difficult to predict, especially with a lack of clear-cut options. With their usual source not currently operating EA will likely work on stats alone and thus Kurzawa becomes appealing after scoring the only goal of the match in PSG’s 1-0 win over Angers.

Souza – CDM - OVR 77>>81
Besiktas recorded an important 2-0 win over Galatasaray this weekend to keep at the top of the table. It was always likely that an IF would occur from the fixture and Souza is by far the easiest solution from the game. Claiming MOTM for a strong defensive performance which was topped off by a goal.

Yannick Gerhardt – CM - OVR 75>>81
There were a lot of midfielder options from the Bundesliga this week and we have yet another now with Gerhardt. The Wolfsburg midfielder pulled all the strings in the middle of the park, providing the assist on both their goals as they managed to take a point in their 2-2 draw with Leipzig.

Tanguy Ndombele – CM - OVR 80>>83
This was the final position I ended up filling and it was a difficult one to make with so many options, none of which particularly stood out over others. Ndombele received a lot of praise after his performance in Tottenham’s 3-1 win over Sheffield United, both from Mourinho himself and the media. The Frenchman scored one of those three goals and was solid all around. The Premier League bias could well help him in here.

Matheus Pereira – CAM - OVR 76>>81
More often than not I will ignore a player with only penalties to his name, but Pereira stands out due to it being a big win for West Brom over Wolves, coming away with a 3-2 win. Both the first and final goals came from the spot and it was enough to see the Brazilian named MOTM.

Donyell Malen – ST - OVR 78>>81
The first of three Eredivisie strikers I have selected this week is Malen and although that does seem unlikely all easily deserve a spot in this week’s side. Malen came off the bench and was heavily involved during their 5-3 thriller with Sparta Rotterdam, scoring twice and assisting another. A performance that saw VI award him with an 8.

Niclas Eliasson – LM - OVR 72>>79
There were a couple of bronze options for this position but with two other Silver IF already predicted I just couldn’t justify another. This worked well for Eliasson who in turn gets the nod from me. Nimes shocked Marseille with a 2-1 win from which the Swedish midfielder scored both goals within. Alternatively, Eliasson could be made into a silver star. One way or another I feel that he will feature though.

Charlie Wyke – ST - OVR 64>>74
I feel like it’s now getting to the point where we are seeing an English silver practically every week. Wyke could well be the latest of the bunch after bagging himself a hat trick for Sunderland in their 3-0 win over Wimbledon, lifting them to 8th in the table with two games in hand over the majority.

Mohamed Bayo – ST - OVR 63>>73
Bayo has previously been snubbed for a hat trick but with limited division in play surely the same won’t occur this time around. The Frenchman scored three times during Clemont’s dominant 5-0 win as they continue to chase at the top of the table.

Georgios Giakoumakis – ST - OVR 66>>76
It is very rare that we see VI give out a 9-match rating and when they do it is for something spectacular. Giakoumakis falls into that category after scoring all four of Venlo’s goals in a 4-1 away win over Den Haag. It’s a result that gives them the needed room between themselves and the relegation zone.

Sinan Bakis – ST - OVR 67>>76
Ending the prediction, we have one of the worst gold IF’s you will ever see (sorry Bakis if you’re reading) The Heracles striker scored three times to help his side to a 4-0 home win over Emmen. Despite it being a midweek fixture, the Eredivisie has seen a lot of love this year so far and thus I doubt the match will be missed.