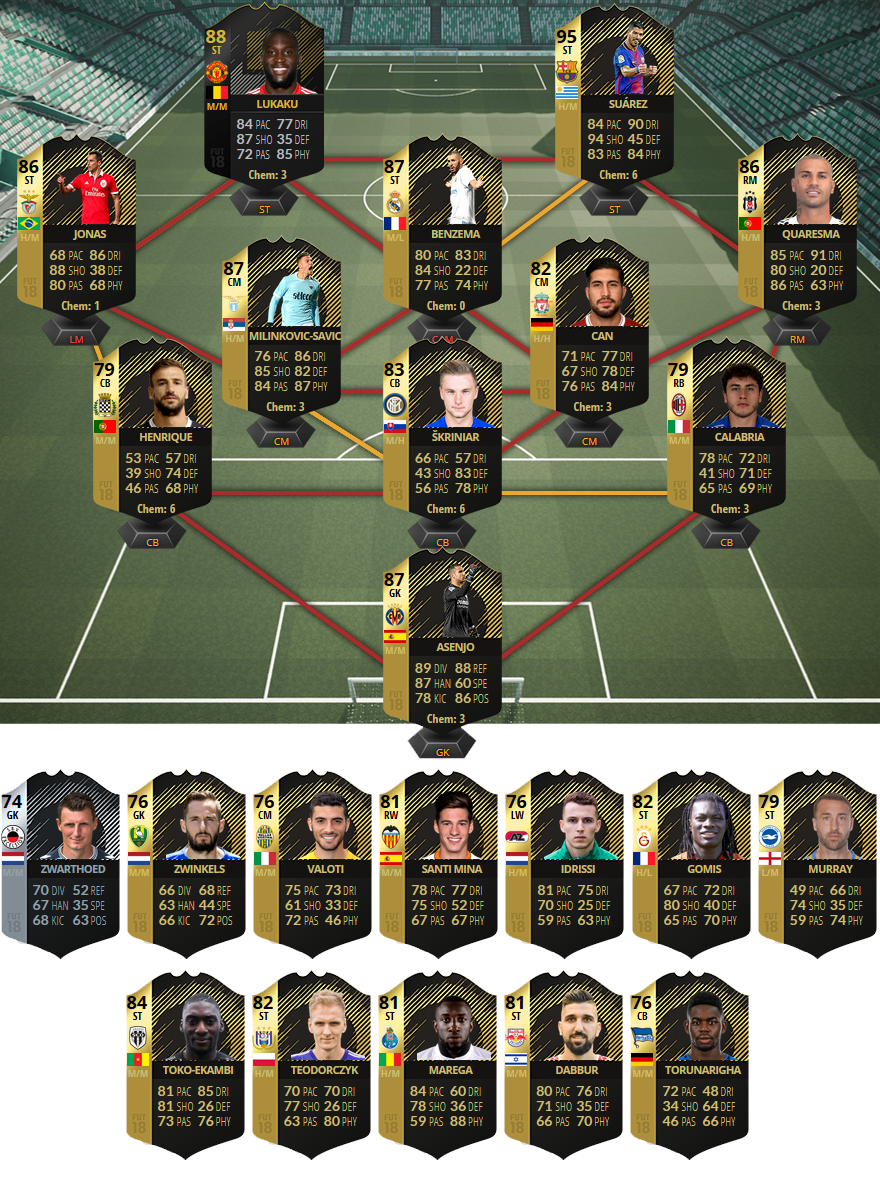 Villarreal were hosts to Getafe for their weekend fixture and despite taking a lead in just the third minute, the game was set to be anything but smooth sailing. The match finished 1-0 and there is one man to thank for this and one man alone. Asenjo was a rock in goal, controlling his backline, dominating the box and also saving two penalties just to ensure he recieves his upgrade.

AC Milan were on the road this weekend as they travelled to Roma for a fixture towards the top end of the Serie A. It was the visitors who put forward the better performance and deservedly left as 2-0 winners with all three points. Calabria is the man who gets our vote today, a clean sheet and a goal from right back, in a fixture this large, is usually enough to secure an inform.

Inter Milan were hosts to bottom of the league Benevento on the weekend, and with competition for Champions League spots getting tighter and tighter, anything but a win was unacceptable. Luckily the hosts came prepared and while their attacking players may have not been able to find the back of the net, both of the center backs did! Skriniar just steals this nomination with a slightly better overall rating than Ranocchia and after receiving his huge upgrade this week, could he also be receiving his first inform too?

Boavista were hosts to Vitoria de Setubal for their Sunday fixture in the Liga Nos and in an absolute thrashing they emerged as comfortable 4-0 winners. Njie up top scored two of the goals, but our nomination this week goes with their center back, Henrique, who not only dominated the back line and helped in keeping a clean sheet, but also bagged himself a goal as well.

Liverpool have been unable to stop scoring recently and with things beginning to look solid at the back as well, West Ham were always going to have a tough game away at Anfield. As predictions would have suggested it was Liverpool who emerged as comfortable winners in a 4-1 thrashing, and with a goal and assist to his name, its Emre Can who gets our vote today.

Lazio were away to Sassuolo for their Serie A match on the weekend and it looks like it was worth the trip. During a comfortable 3-0 victory it was once again Savic who stole the show. Scoring twice and dominating the midfield it looks like we could be seeing a third inform in the same week he recieves his winter upgrade, this could be one hell of a card!

Besikitas were hosts to Fenerbahce for their heated match on Sunday and in a game of four goals, it was the hosts who emerged as 3-1 winners. Quaresma was critical to this success, scoring twice himself and putting in an incredible performance from start to finish, this just has to have secured his second inform of the year.

Benfica were away to Pacos de Ferreora for their Liga Nos match and as most would have expected, it was the visitors who took all three points on the night. In a comfortable 3-1 victory it was Jonas who lead from the front, scoring twice on the night with an almost perfect performance too.

Real Madrid were at home to Alaves in La Liga and with a refreshed Ronaldo having recovered his form, goals were once again flowing. Two goals for Ronaldo just won't be enough for yet another inform, however with a goal from the spot and two assists, Benzema may have just done enough to earn his first.

Barcelona were at home to Girona for their weekend fixture and once again they were ready to destroy their opponents. In a dominating 6-1 performance; Messi bagged himself 2 goals and an assist, Coutinho managed a goal and an assist, however, the key nomination simply has to go to Suarez who provided us with 2 assists and a hat-trick as well. This just has to be his third inform this week!

At the start of the season most people would have expected Lukaku to have a whole bunch of goals and special cards under his belt by this point, sadly this wasn't to be. Manchester United were hosts to Chelsea for their league match on Sunday where despite initially going one goal behind, they left as 2-1 victors. Lukaku not only scored the first but assisted the second and while normally this may not quite be enough, in such a high-profile fixture I think he may have just secured his second inform of the year.

SC Heerenveen were hosts to Excelsior for their fixture on the weekend and although the visitors were the side who stole all 3 points, there is one man in particular who deserves recognition. Zwarthoed ensured that his side were victorious, pulling off some incredible saves and maintaining his clean sheet. With a total of 26 shots against him and 8 on target, this man has truly earnt his inform this week.

ADO Den Haag were away to Ajax for their weekend fixture and despite the home sides best efforts, scoring even a single goal just simply wasn’t on the cards. Ajax racked up a total of 32 shots, 11 of which were on target, but thanks to some outstanding saves made by Zwinkels, the game ended 0-0.

Hertha Berlin were away to top of the table Bayern Munich for their Bundesliga fixture on the weekend and despite the odds being heavily stacked against them, they held their ground and earnt a 0-0 draw. Now while their keeper had a great game, competition this week is tough and hence it seems unlikely for him to make the cut, Tournarigha however was fantastic at center-back and has rightfully earnt his spot amongst the predictions.

Hellas Verona were hosts to Torino for their weekend match and despite the odds being stacked against them, they emerged as 2-1 victors on the night and took home all 3 points. Valoti from the central midfield role was the hero of the hour, scoring both goals and ensuring his side took all the points.

Valencia were at home to Real Sociedad for their fixture against Real Sociedad and despite the visitor's best efforts, it was the hosts who took the points in a 2-1 victory. Mina from the right-wing position was incredible, scoring both the goals and boosting his team to victory.

AZ Alkmaar were hosts to Sparta Rotterdam for their Eredivisie match on the weekend where in an incredibly tight match, they just managed to edge the win during a 2-1 victory. Idrissi was the hero of the hour, scoring once and assisting the second in a near flawless performance for his side.

Galatasaray were at hosts to Bursapor on Friday and in a game of 5 goals, it was the home side who scored each and every one. Now while there were several solid performances and hence several possible candidates for this TOTW, there is one man who without doubt has managed to secure his spot. With a hat-trick and an assist to his name, Gomis finally secures his first inform of the year.

Brighton were at home to Swansea and with both sides desperately fighting relegation, all three points were a necessity for each team. In a game of 5 goals it was the hosts, Brighton, who stole the points with a comfortable 4-1 victory. Murray lead from the front, scoring twice and also bagging himself the man of the match award alongside this TOTW nomination.

Angers were away to Lille for their Saturday match and in a game of 3 goals, it was the travelers who emerged as 2-1 victors on the day. Ekambi was the man of the hour, scoring both goals and securing all three points for his side.

Porto were away to Portimonense for their weekend fixture and in a game of 6 goals, it was the visitors who emerged as 5-1 victors. Marega played a part in half of these, scoring twice himself, assisting the third and received a perfect rating from the match. We could be seeing a fair few informs from the Liga Nos this week!

Anderlecht were hosts to Royal Excel Mouscron for their weekend match and in an 8-goal thriller, it was the hosts who managed to edge out a 5-3 victory in the end. A large part of this was thanks to their striker, Teodorczyk, scoring himself 2 from open play and another from the spot to wrap up not only his hat-trick, but hopefully his first inform too.

Salzburg were away to Sturm Graz for their weekend fixture and in a 6 goal epic, the visitors emerged as 4-2 victors. Dabbur was critical to this success, scoring two himself and putting forward a fantastic performance from start to finish. 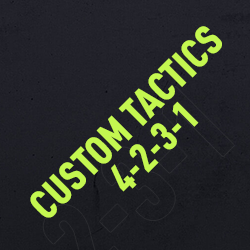