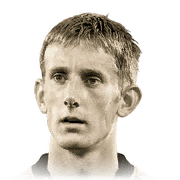 Playing FUT this year help me to realize that this game can be strange. Sometimes you feel that something is wrong expecially with keepers: I don't know why but when I play against some keepers I got the sensation to shoot the ball against a wall (Courtois, Pope, Donnarumma, Alisson are only few hated keepers). But, when I buy the SAME keepers something appens, they turn always into donkey and let me play in 10 men.

I quicksell at lowest bin my previous De Gea after he let me LOSE a game at the last second because he rebound a 2 km/h shoot on the striker's feet and in the same time fell asleep falling on his back like he was hitten by a venom dart.

I but the Dutch legend for 390k and I was impationt to thes my first icon keeper... well, how a disappontment.

First situation: a 79 rated Spanish striker (so useless that I did not remember the name) do a centyral, slow, lob header from OUTSIDE the box. GOAL

Second situation: Gold Rare Sissoko - 70 long shot - shoot on target at mid-height on the opposite post. My van der Saar just let the shoot fly over his body like bullets flies over Neo in Matrix. GOAL. Rage quit. Quick sell the Icon at lowest bin with a 50k loss.

End of the story.

Icon model, by the way is very exciting have one of the best Premier League keepers of all time.

All concerning what you can expect from a keeper.

He can't stop a shoot.

He can't do a decent kick