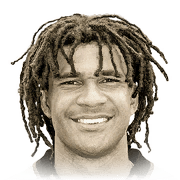 So after a lot of debate with friends, I decided to try this card out. Sadly, Financially I'm not in the market for middle or prime Gullit :(

If I'm being honest I wasn't expecting much from this card, I run a 3-5-2, and I score A LOT with my mid-fielders, usually Pogba or Ballack but I bumped out Pogba to give baby Gullit a go.

MAN DID THIS CARD DELIVER THE GOODS BABY

I've never had so much fun playing with a card, his grace/composure combined with his ability to do everything made him a key player for my weekend league squad.

If this review gets a good amount of likes I plan on making a review video with highlights from a future weekend league.

With a "hunter" chem style on him, his shooting is excellent, having a 5 start weak foot is SO dangerous in this game, being able to threaten a finesse shot from either foot gives you so many more options and makes it a lot easier to punish goal keeper movement