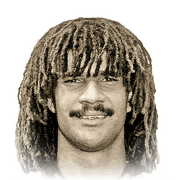 I bought this guy after trying Cruyff Eusebio and almost every other Tier 1 Icon, and omg nobody is even close to Prime Gullit. Dude has the best long shots in the game. He is jumping like CR7, Finessing like Cruyff, Tackles like Vieira. Runs 24/7 with his 95 stamina. The best player, probably end game Icon for me. Unless his SBC is going to be released.

If you debating between him and R9 or Cruyyf/Eusebio, buy him I've tried all of them and Prime Gullit is the best.

Not the fastest, since I am using Marksman. But who cares, in fifa 19 pace is not that important.

4* skills for some players

I did save up during 2 months in order to complete PIM Gullit, as many of you may have did. I was really disappointed with Prime Gullit being released instead, but I did go for it as I was too excited to have any version of Gullit in my end game team. And boy, I don't regret any second doing this SBC.

Even though his market price is lower than his SBC, if you ask yourself should I do this SBC during TOTS, I will say go for it 1000x times. I am convinced this card is the best value for price in the game. I use him as a CDM in a classic 4231, and he changed everything in my team. Even though I already had a really good team, Gullit offers you so much! As a cdm, he kills everybody. No one is able to push him, he intercepts a ton of dangerous passes, he always comes back to stop your opponent from shooting and he wins EVERY header. He doesn't care about Cristiano or FB Ibra.

I recommend you to not put him with stay back while attacking, because he also offers so much attacking wise despite being CDM. His shooting is unstoppable, his passing insane and his 5* weak foot is the best. Having such as beast always being the additional attacker and defender makes you feel that he is single-handedly managing the game. I often put him to CAM at half-time and oh boy, I do not count how many times he scored the winning goal.

+ Passing: Perfect, nothing is missed even when pressured by opponents.

+ Physicality: What can you say more than he's a TANK

+ Dribbling: He is obviously not Neymar, but he feels really agile, never stiff even when there's bad gameplay.

+ Stamina: NEVER tired, NEVER have to sub him off.

+ Pace: I use a shadow on him, and having almost 99 pace is absolutely insane and broken for this card.