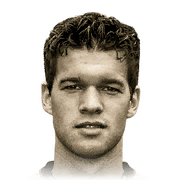 I recently did the Ballack SBC for around 1.2m which I think is a really good price for someone with those incredible stats. I hear a lot of people say they do not like him because he is clunky. You are using him wrong. He is best at CM so you can make use of his amazing shooting and final third passing. Is a tank at CDM also. You can play him at CAM if you desire but his work rates can prevent him to make runs sometimes.

I have played 20 games with his loan and 12 with the actual card. So 32 games played with 22 goals, 18 assists from LCM in a 4312 formation. Mostly in FUT rivals and Fut champs. (Engine chemistry style)

Pace: 10/10 for the kind of player he is you don't need someone to quick but he feels mid 80's with the engine boost. He is so good at running back and catching up with attackers, as well as bursting forward at defences causing chaos.

Shooting: 10/10 His shooting is unbelievable he will score any kind of shot you can imagine. His finishing with both feet is consistent and accurate. His finesses of course are even more broken. His long shots are also good he will often test the keeper out winning you many corners or even rebounds. He will give you a return of a few screamers. His volleys are also very good for the little opportunity that I used them. Despite his work rates he will frequently be there to pass too in a good shooting position, his attacking awareness is very good as he find himself in the right place at the right time. His shot power is mad 94. That is all I have to say about that.

Passing: 10/10 He is ridiculous the best I have used so far this FIFA. His short passes are so crisp and accurate despite the poor game play in this game in general. He will constantly feed through balls in perfectly for your attackers. His crossing is okay never really used it but its not bad by all means. His free kicks are dirty good, it does have the awkward run up animation but he scored 3 in like 8 attempts for me (I also used Depay for free kicks in my team). Long passes as expected are pin point. His curve is not noticeable thus far so not a con for me.

Dribbling: 8/10 I was really expecting Ballack to lack in this department but he was not bad at all. He was very good with the Engine chemistry style si boosting his balance and agility to make him able to turn faster. He also rarely gets knocked down due to his strength as well. His ball control is up there with the best and his dribbling is pretty good you can run at players and weave in and out at times. Fake shots are very effective with him, as well as some skill moves. He is always very composed too like his 85 stat would suggest.

Defending: 10/10 He was solid honestly really good defensively. His heading in attacking areas was dangerous, scored a few and would win so many defensively from corners and long balls. His interceptions felt better then Kante's for me due to his long legs and strength. He would often keep the ball with his good ball control and not lose it like most other players. Sliding tackles where always accurate and brilliant. He is so good defensively. Personally I always had problems in midfield with defending but he fixed that for me. By far a really underrated stat for him.

Physical: 100000/10 Oh my this guy is just a rock on top with his good dribbling, pace he is just a monster. He jumps and wins almost every header making him lethal in the air. He lasts all game for me constantly running. So that is a massive plus for me.He is soooooooooo strong no one can knock him off the ball unless its for cheese. He can bully even the strongest off players off the ball and holding onto possession. This goes perfectly well with his aggression.

To conclude he is an end game icon and well worth picking up. He is similar to viera and Gullit (Not as good) but close and is more affordable for some people. I would 100% recommend him.

Clunkier then some other taller players

I needed a big man with okey pace, good def and the most important - passes

Ballack 91 provides you a defensive b2b experience and, surprisingly – hella bunch of goals. I have sold my CR7 to make up my squad and Ballack's headers... Woa

After playing CR7 - Ballack is similar to CR7 on corners

gets tired on CDM by 75 min

I mostly play the 4231 and I like one of my CDMs to be an out-and-out CDM, so I use Kante, but I like the other one to be more of a box-to-box one on Balanced Attack so I can score some finesse shots from outside the box. So for this purpose, I looked at all the possible options in the game, and after Gullit, I thought Ballack's card had the best stats for this role, to attack as well as defend.

I use him with an Engine chemistry style to boost his agility and balance, which looked like the only cons. Tried him with a Shadow and Sniper as well and preferred Engine.

Pace (7/10): With an Engine, he has about 85ish pace. Doesn't feel slow, doesn't feel fast either. It's just in between. Sufficient for a deep position, no complaints.

Shooting (8/10): It's great. Finesse shots from outside the box with both his right and left foot go in. They don't go in every single time though, he sometimes hits the post. But they're mostly on target at the very least. Long shots where you just power up and bang it are a bit inconsistent, which is strange because he has 92 long shots. I think this might be because of his rather average dribbling, which I will get into. Some people have said his long shots are great, but I personally prefer to finesse them when I can with him.

Passing (10/10): His biggest pro. He is legit one of the best passers I've used in this game. They just go exactly where you want them to. As a second CDM who does attack but from a deep position, I like to pass it off to my CAM or striker and he makes no mistakes. Rarely loses the ball.

Dribbling (6/10): There's no sugar-coating it. His dribbling overall isn't great. He is a bit clunky but with an Engine he becomes very usable as long as you play him CDM/CM. I don't think he's agile enough for a CAM because you don't want him getting in behind and losing the ball which he will because he's clunky. His dribbling and ball control are excellent when you're not sprinting, but when you're sprinting with him, you'll have to be a little careful. Don't try to dribble past players with him, it's not going to work, pass it off if you encounter traffic. I wanted to compare him with Pogba because Pogba has low agility and balance too, but when I tried Pogba, his dribbling was far better. That low balance stat on Pogba has to be a lie. However, this was the only area where Pogba was better because Ballack was better at everything else, especially shooting.

Defending (9/10): Great in defence. Tracks back, bullies players sometimes. Would've given him a 10/10 if he was a little quicker. Tall, so wins a lot of headers.

Physical (9/10): Felt like his stats suggest. 85 strength, he bullies players but not every single time. Can hold his own. 88 stamina is great. If you go into ET, in the second half of ET his stamina drops into orange, so is a slight concern. But hey, you can't expect better than that.

Overall I'd give him a solid 9/10. Only real con is the agility, but that's what separates him and Gullit. And Gullit is significantly more expensive and not everyone can afford him.

If you're expecting a midfielder that makes runs into the box and scores, he's not ideal because his dribbling isn't good enough to beat players. But as a deep playmaker that assists and scores finesse shots from outside the box, he's excellent.

I don't believe he is a card for everyone, so make sure you try out his loan before you get his full version.

Finesse shots with both feet