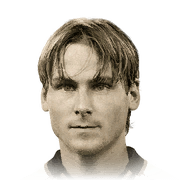 He is the best winger I have used in this game. He is insane. His longshots are sick, his finesseshots are op and he is a great runner and dribbler. I used him as a left forward first, and he was good, but when I switched him to a cam in 41212 narrow, he was the best player in the game. I have never felt so happy about a players performance in FIFA since Ibarbo in FIFA 14.

His runs without the ball

Height is probably the only negative thing about him.

This Card is worth every coin, never seen such an fun & unbelievable Card since FIFA 13 ( Di Natale 92 ). He was decent as a Winger but then i switched him to a CAM and it worked so well. He is at the moment one of the best Players in Ultimate Team ( My Opinion ) If you have enough coins then you should give him a chance and try him out. I can highly recommend him :)