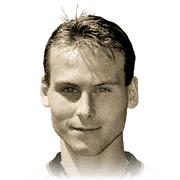 I bought him before patch, because he was cheap for an icon and had 5* WF. Thought he would be a good CAM in 4231, with the first time finesse. And he was.

Pace: With 90 pace you expect him to be quicker. He usually feels slower (like 83 pace)

Shooting: Even after the patch he still scores finess shots outside the box. Its his best attribute, even though its only 82. Feels like high eighties/low nineties. With both feet, but preferably right.

Passing: His passing is good. Messes up the through pass here and there, but overall it matches the rating. His crossing is amazing, especially with corners. 1/3 corners are a goal with him.

Dribbling: Dribbling is decent. He is no Neymar, Douglas Costa with high agility skill moves. But again matches his rating (87).

Defending: As a CM he is better then expected at defending and blocking passing lanes. Also not weak in duels.

Physical: His stamina could be higher, but he still can play 2 matches after each other without going red (as a CM).

If you want a cheap icon he is one to recommend. But you are probably better of saving up for his 89 icon or higher.

Shooting outside the box with both feet

His crossing (mostly from corners)

Pace doesn't live up to the 90 rating