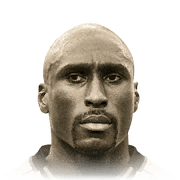 Hello there! I have been testing the Mamut in fut champions and i have to say that i loved it.I think it's one of the best CB i've tried in Fifa.I made his SBC o Futmas and it came out for 440 K,fairly profitable in my opinion

It has a very good Pace,and also defends in a very aggressive way because it is a Mamut and so the animals of this style

Obviously being a Mamut has some disadvantages,such as his low dribble and normal pass,but it does not matter,is my Mamut and i love him very much

campbell is defenitly one of the best cbs in the game just look at his stats and compare him to anyone . his pace is good for his body type . passing and distribution are awesome , very good defending and extreme strength, can bully anyone, doesn,t give away penalties as he always come away with the ball. has a power header trait which is very useful in corners. i did the sbc as i had untreadables

passing is very good for cb

In real life and in FIFA I am a person who takes pride in the way my team defends and sol Campbell makes it so easy for me to defend. He is my best player in my team and the best defender I have used so far in this game. I play him at the back with manolas because I want someone agile and fast to compliment him and they are fantastic as a duo. those two have been with me for over 250 games together in div 4 and in fut champs. In the game this year my defence seems to be the crucial part of my team as I dont score more than 2 goals in most games but I barely concede unless it is a green timed finesse shot which are unstoppable. I can now confirm that this is why he is the best CB I've used so far.