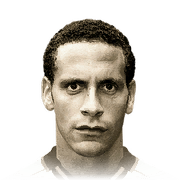 INTRO- For anyone wondering I'm currently d2 rivals and get between gold 1 and elite 3 in champs. Ok.. So I Don't really like cbs in fifa this year due to the crappy gameplay issues where your defender would just not clear or pass the ball when commanded to and would instead give the ball up to an opponent who would get the chance to score. However when those moments don't occur and you are actually allowed to defend, this guy not only does the job but does it very well.

PROS- He is most of the time very well positioned (with my tactics) and can win an loose ball effortlessly due to his speed and reactions. You can also rely on him to fill in for full backs when needed and on occasion to come out into midfield to distribute the ball out. (be careful as his passing can be off) His actual tackling is great too, Easily will win the ball on a good time slide tackle, and for when the game allows you to make a standing tackle without it falling to an opposing player he will 90% of the time be able to keep a good hold on it until a good pass can be distributed. His strength is also great. Hes one of the few people I've seen knock R9 off the ball and to make that more clear he can do it with his pinky... Seriously his strength is amazing.

CONS- However this card does have its downs but they don't override its ups. First of all without low depth in tactics, this card will 75% of the time be caught out of position which of course will lead to a gap and an easy through ball from the opposition into your box. Like i mentioned before his passing can be off, a simple over the top ball to a full back can lead to a bad turn of events due to the obliviously poorly placed pass. Despite being 6'2 his aerial ability lacks with the 82 jumping and what i would call low heading acc for an 88 rated cb. And lastly his stamina might cause problems if playing in a high pressure tactic but personally when i play high pressure he can still last but be careful.

CONCLUSION- So overall he is an outstanding cb who can win the ball easily due to his defending ability and great strength, pace, aggro and positioning. To help with the work rates and stop him from pushing out so often I recommend putting low depth in the custom tactics. Again be careful with his passing. I'd also like to suggest either anchor or backbone, I'm using anchor purely for the pace and big physical boost. but with backbone he gets an alright passing boost but not enough for his passing to be reliable still. Maybe backbone could be good but only the for people wanting him to come out or pass the ball often. For those that didn't skip and look below, thank you for reading this and i hope it helps you with your decisions and have a great day or night :)

Obviously Defending- Easily wins the ball even against the best

Passing- Passing is very clumsy at time so be careful