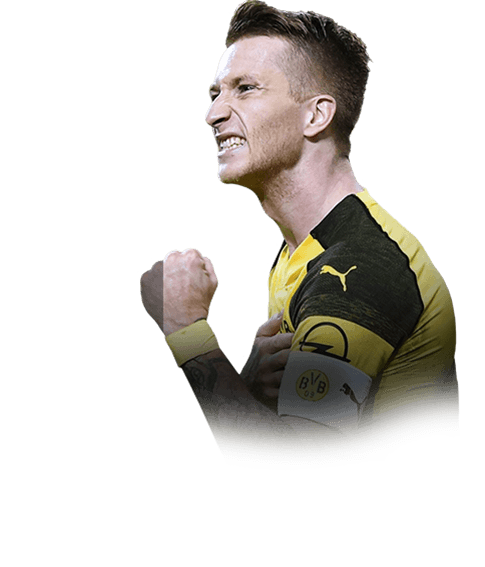 His real-life stats are currently 2 goals and 2 assists in 7 matches in domestic competition. He also received 2 yellow cards and 0 red cards.

Where do I start here. I was one of few unfortunate ones that didn´t do POTM Reus since I didn´t want to commit that many coins into an untradeable player that early into the game, a fact that I´ve regretted ever since the Flashback Götze SBC came out. But let me tell you If you have the same problem and just didn´t have the balls to do the Reus POTM like me then let me tell you this card feels just like the POTM card Itself.

His Shooting is insane he scored 29 goals in 16 games for which consisted of WL and DR League 4 respectively. Finesses, outside the box powershots, inside the box poach shots he really is the full package in terms of finishing.

His passing is amazing as well assisting 11 in those forementioned games from the sole striker spot is just crazy.

Pace. He isn´t lightning quick but once he´s trough there isn´t much the opponent can do to stop him from scoring.

Dribbling. One of the best dribblers I´ve tried this year, he feels very agile and sharp on the ball and can easily dribble past opponents.

All in all Reus is a fantastic player which is gonna improve your game massively. Haven´t had that much fun using a player in a while.

Absolute Elite Tier player and if you have the coins you should definitely try him out!

His Shooting is insane he scored 29 goals in 16 games for which consisted of WL and DR League 4 respectively. Finesses, outside the box powershots, inside the box poach shots he really is the full package in terms of finishing.

His passing is amazing as well assisting 11 in those forementioned games from the sole striker spot is just crazy.

Pace. He isn´t lightning quick but once he´s trough there isn´t much the opponent can do to stop him from scoring.

Dribbling. One of the best dribblers I´ve tried this year, he feels very agile and sharp on the ball and can easily dribble past opponents.

The EA gods blessed me with this card from the untradeable TOTW challlenge. Honestly The best card that I have ever used in fifa, amazing shooting, very quick, awesome passing, all round amazing, there is honestly nothing bad about this cardexcept for strength at times, but that is not an issue if you play him at CAM

Super quick for a CAM

Very good work rates (gets back in defense)

Strength at times under high pressure (like when playing striker)

This is not a rant about how shit he is so Reus ultra fans just use your brain please. I bought this card in the hopes of bolstering up my striking line-up. i pair him with Griezmann, who is ut. For 320k i thought that this card would hold something pretty special but i was left pretty uncontent with his performances. i used a hawk is i set him up to get in behind because of his really well rounded card. He positioned more like a CAM in-game and even with the pace, shooting, and physical boost i felt like he was just flat. His passing was great with interplay but he struggled to get around a player, even behind lines. I am not a shit player either but for 320k as a STRIKER i feel a bit robbed. he could finish when he was found in the right areas but with the years crap pace he wouldn't be able to break free often through defensive lines. For the money i can see why he is expensive as a CAM as his qualities are more suited to that position. Just not all there for a quality striker but he did d something each game pretty much. i would recommend Lewadowski as probably the best striker from this league or SIF Werner, but that card does tend to lack a dangerous touch for goals at times.

good finishing-can be 50/50 depending on how broken the GK is. finishes most of his dinner but the odd shot may not find the target or corner.

4 star weak foot and skills really helps with finishing and adding flair to your game. Not good if you're a typical meta player and abuse game mechanics

aerial battles- 9/10 times he will not win a ball in the air, this was expected really with his stats but i do tend to like a more of an out and out striker who can do most things.