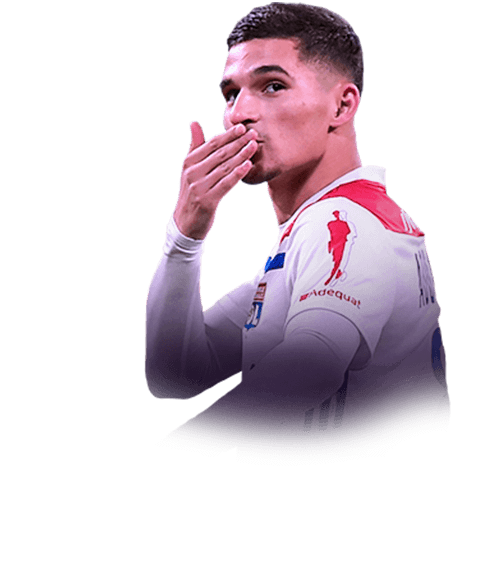 My First Impression was wow what a Card and he Perfect fitt in my Squad.So i Decide to buy him and test him in Fut Champs

And yeah what i cann say he is Amazing.He feel like an Icon and he is the best cam option for 800 K or less so go and buy him.

I Only have 2 Minimal Cons

First of all sorry for my english since is not my first language.

Now let's start with the review!I'm an above average player but I have to say I also have a good team so I m not a so called pro.I bought Aouar future stars mainly cause I needed an all rounded cm to link with toty neymar but I didn't expect it to be so good.I've tried many players and also many icons but I was very impressed with him.

I play 41212(2) in game and he was the left cm i was looking for!You can also play him at cam in my opinion but I think he's perfect as cm especially with a more defensive cm like kante for example as cdm and cm with H/H work rate as rcm.

In this weekend league i finished elite 2 and the main reason behind that(except toty neymar which in my opinion is the best fut19 player based on the current meta)was Aouar.He's not that tall but he often wins duels with strongest players like pogba or fabinho and that's the quality that impressed me the most.He has 80 as defensive value but it looks way higher and everytime he recovers a ball he always makes the best pass possible and that's another thing that impressed me.I've tried many players with high passing value that often misses an easy pass but Aouar is not one of them.He's agile and that's a big pro in my playstyle cause i don't like clunky players that are slow at turning with the ball.His shot is good as well,obviously he won't always deliver but when you have the chance to shoot with him just do it and don't be afraid cause most of them times it will go in especially with finesse shots.

Now the answer that many wants is:is he worth the price that actually is around 800k coins?I would say it depends on your team and the role that you would give him.He's not suited as cdm and he needs for sure a stronger physical cm close to him but his stats don't lie like many players I tried.His workrates are perfect for him cause he gets the chance to shoot often and he's great at passing.I wouldn't play at cam cause in my opinion you lose the chance to appreciate some of his hidden skills like the positioning in the field which is always perfect that way but of course you could play him there as well.For 800k of course you can get also icons and game changing players but if you have already a well built team and extra coins I personally would advice you to buy it if you are thinking about it.A big hint that i can give is that in my opinion he doesn't suit the 4231 meta unless you would play him as central cam but he does way better in a 41212(2) or a 4312.

Ability to wins the ball back

Agile but he's not mbappe.

I bought him and vini the kid (vinicius junior) to put in my team. I was expecting to be baffled by vini, but this guy took all the focus. my, oh my! He is so versatile! In my many years of fifa i have seen that some players get more goals than others but never assists. This lad brings those assists! He creates space on his own and his passes, both long and short, is just so perfect! i cannot understate how great a playmaker this guy is! Another great bonus is his physical og defensive stats, which means any loose ball in the oponents defense will be interceptet by him. And yes, he will bully some of the weaker defenders. I havent event started to talk about his shooting, which is just perfect, long shots, inside the box, volleys.. everything goes in! His dribbles makes every small room on the pitch his playground and enables him to finish or make a wunderfull pass. All in all a really great lad!

Is he worth the 870k? YES, for me there is no doubt about it and he will stay for a long time!

mabye if was like 6'5 tall he would be better? or with 5/5 sm/wf but that would just be unrealistic.

otherwise its only his stamina i would highligt.