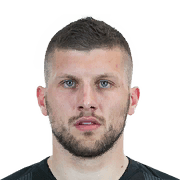 His real-life stats are currently 2 goals and 0 assists in 2 matches in domestic competition. He also received 1 yellow cards and 0 red cards.

As I sold both my wingers (Robben-Ribery), and there was no one else worthy of playing on the wings, I decided to use a system including 2 forwards instead of buying them again. I first used Uth, who had back then undoubtedly the best shooting of my team, however that's the only thing we was good at, as he was invisible the rest of the time). I decided then to use Wagner, to possibly remind me of my 86 Mario Gomez.. Which was far from being the case. Kramaric was weak and slow and Plea wasn't really good either. Then, I thought "screw up the overal rating" and choosed him..

These 750 coins were the best investment ever (quality-price). The guy is just unreal for his rating (he plays like a good 85 (or even more) player, and is decisive every match, against the best goalies of the game (De Gea UCL, Courtois, Never, Handa, etc..)