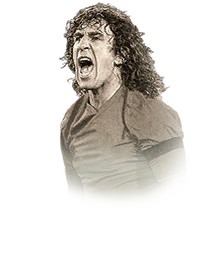 I had never had an Icon in a squad as I thought that they were over rated but this card is the exact opposite. I was quite surprised by him as he had everything a centre back needs and his height was no issue because of his great jumping. I added anchor to him which gave him a +5 in pace and made ALL his defensive stats 99, it also gave him 99 jumping which would prove to be very useful and he could win most headers against flashback Ibrahimovic. He was fun to play with and he is very lethal from corners making great runs, jumps and headers. He is also reasonably cheap going for about 700k if you complete his SBC. His strength was outstanding beating everyone in a battle. The only issue which I had with him was that his long passing often resulted in the opponent intercepting his pass because it was quite weak, his short passing was great but the long passing did let him down at times. He made some amazing tackles though and was quite reliable at the back. He was a lot of fun to use and created a great partnership with my 86 Varane and 88 Alonso. His pace was alright but also nothing special. He was surprisingly great on the ball making great dribbles and runs forward to push the game up the field. He also has phenomenal Stamina, lasting pretty much the entire game.

Height (This could be an issue for some people but not for me as his jumping made up for it, only included it because it might annoy people)

Pace (Could be better, but you could just use a shadow)

So i completed him a while ago thinking he will replace gold Ramos, after ove 100 matches i guarntee to any one that he is the worst defender in the game !!

2-He is super slow !! even with SHADOW/CATALYST/HUNTER

6-headers is very lame to !

overall he is very poor defender ! i even tried Halloween AMPADU he is way better ! , damn even gold AKE is better !!

ps : he is so bad even in sqaud battles !