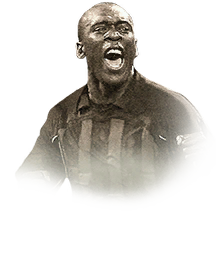 And so... The moment has come. This optimus version of Clarence Seedorf is fuc*ing perfect. The thing i love the most of this card is that nobody can steal him the ball: if there's a shoulderVSshoulder he will win without problem, in every situation. maybe he has only one cons (MAYBE): his finesse aren't the best of this game, but if you use power shot, he can band the goal from every position.

Clarence Seedorf is everything. He can run, he can shoot, he can dribble, he can pass, he can absolutely bully 99% of opponents physically. He is almost the complete player, but certainly an amazing addition to almost any team.

I thought I would regret doing this SBC because people were saying he was "not worth the price", but he IS. Because Seedorf has key stats in every category, you do not have to worry about anything. He is literally the complete package.

Although Seedorf has amazing stats and plays just as well, he does have a downside. Seedorf's height is an issue. He is not the tallest player on the team and he is not the shortest either, however his height can be a liability if you do not have some tall players around him with the likes of players like Zlatan Ibrahimovic in some teams.

Defense (for a CAM)