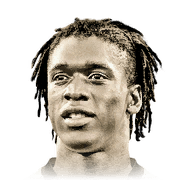 After reading reviews on fubtin for years, I decided to write my first one.

If you want someone help you control your midfield, pick this guy. This guy is a cheap Gullit, and he worths every coin you spend on him

This man is another level. I sold Gattuso 89 for an more attacking midfielder. This guy does everything. Doesn´t matter if it´s attacking or defending.

He can score absolute screamers from outside the area, but his finishing 1vs1 is also great!

The dribbling en passing aren´t bad either. He can do it all.

The defending side is a little bit worse then the attacking but still very good. He can push players easily off the ball. The stamina makes sure he keeps doing it all game.

Maybe the stamina is the best thing about this card.

Is not as tall as Fellaini.