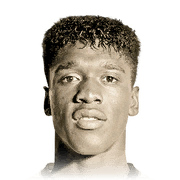 First, you'll think: why this title? Well, Willy Wonka is the nickname gived to him by an Italian sport journalist, and the reason is for the wonders he made on the pitch.

So, go ahead and see how Clarence Seedorf doing in game, I tried the baby version which is referred to his period on Ajax at the beginning of the career. He was at that point a misunderstood genius, many clubs does not realize his huge potential but... well see the palmares of this gentleman. It speaks for him.

Pace 8.5/10: fast, not super-fast but good enough for a CM, it seems to be higher due the exellent ball control

Shot 9/10: very, very good. if is not goal, the keepers are always scared by a longshot taken with this guy. Decent finishing also, and surprisingly accurate headers

Dribbling and passing 9/10: his technique is pure joy, amazing feet at your disposal to create chances, cross, taking free kicks and even corners.

Defending 8/10: this is a surprise, even for a fan of the player like me. You can expect due the values he is a offensive player and nothing more. I was wrong. Due his workrates H/H he is everywhere in the pitch, catching the wingers in defence, intercepting the ball in the middle and pushing of the defendes. Unespected

Physical 9/10: strong, even more than the stats suggest due his high balance. Stamina is OK even in the last part of the match

To summarize: the BEST baby icon I have tried in FUT 19 so far. If you have coins buy him. I'm saving 400k to get the prime version... can't wait.

Division rivals and SB on worldclass/legendary

Literally all the stats, so balanced and complete midfielder. No weak points!

Maybe the price, but if you get an Icon you don't have a low budget so...

I play 4-2-3-1 with Kondogbia as 1 CDM on stay back but in order to support my attack i like my other CDM on balanced so they can get forward as i tend to play possession and have the ball in the opponents half a fair bit. I have tried a bunch of players in this role, IF casimero IF Modric, 88 Veron all had positives but were lacking the all round game i wanted for the role. So i got rid of veron and bought in Clarence and he's made a real difference to my team. I added shadow to him so his pace (93) and acceleration (97) are great in both attack and defense and as he has H/H workrates he pops up all over the pitch. He's gotten in behind to score goals but also got back to make last ditch interceptions. His defensive stats don't look that spectacular even with shadow but with 84 strength and balance i find he's great at getting in the way and forcing midfielders off the ball. His stats are basically all mid 80's so he can do everything, his finishing is only 77 so he can miss easy chances but i find if you smash everything then it improves his conversion rates, also i rarely get in one on one with him and he more than makes up for it with his long shots, the rating is just 85 but with 90 shot power he's scored loads for me from around 20 yards out if you get a chance just outside the box then shoot. He tends to gas at 75mins as he gets through a lot of work but i packed an untradeable 87 witsel who i bring on for him but he wont mange extra time due to his workrates - however If you want a box to box CM and dont mind finishing the game with someone else then i would take him over higher rated cards and other similar icons.