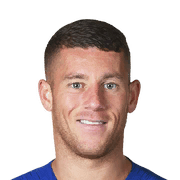 I'd have never considered using this card if I hadn't packed it in one of those untradeable Premier League packs but as you know it now, I did.

I'm currently using a pretty solid team but I was struggling to find a CDM next to my Fabinho in a 4231 second variation, not that there's no option at all but I've been saving the time of one of two WL so I could afford a Pogba/Kanté.

I played him in two consecutives WL + some rivals and I have to admit that i was actually suprised by this card.

Don't get me wrong, this guy isn't a Gullit, a Pogba or any top card at his position but if you have a really strong guy next to him and you're struggling to make differences offensively i sincerely think that you should give him a shot.

I did not expect much of Barkley as it was only in my eyes, a small upgrade on my previous player of Ruben Loftus-Cheek (Europa league), however I was pleasantly surprised. I used Barkley as a CDM (I know hear me out) in a 4-2-3-1 in game alongside Fabinho. Now some of you may be skeptical about using Barkley as a CDM but I can assure you he is more than up to the task. When using a Sentinel chemistry style Barkley wins nigh-on everything in the air and aside from the multiple flashback Ibrahimovic's I came up against almost no one could out muscle him. Defending-wise Barkley is a bit shaky with any sliding challenges but is perfectly competent in standing tackles and rarely lets anything past him. despite being placed in a defensive position, Barkley managed to contribute his fair share of goals and assists as well managing to score 8 and assist 12 in just 31 division rivals matches (mixture of division 3 and 4). My only gripe about Barkley would possibly be his Stamina. I was applying a squad fitness after every second match and by the 60th minute in the second match Barkley would be extremely tired.

Passing (both long and short)