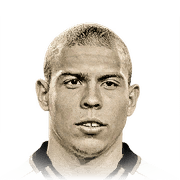 I recently crafted R9 using all the coins and untradeables Ive saved all game. What did it cost, you ask? Everything. But holy cow, can this sphere of Brazilian flesh ball out.

I have just scored my 100th goal with him in 90 games, exclusively in 2 weekend leagues and division 1. Last weekend, he got me to Elite 3 for the first time in my Fut career. His scoring stats are even more impressive coupled with the fact that he plays in a front 2 with the equally as goal-hoarding FB Ibra. They are a combo deadlier than cheese and crackers.

I have tried the likes of NIF CR7, Baby Cruyff, TOTGS Neymar and more, and prime R9 is EASILY the best player ive ever used.

Now that TOTS has dropped and many high rated cards are coming out, I was really hesitant to do his sbc (worries some better cards would come out). In the end I realized I could do it for 2.9 million with all the untradeable in my club, so decided to go for it. This was by far the best decision I’ve made on FIFA.

I already had an extremely strong squad, but this card will take any team to the next level. While I am certain TOTS with similar, if not better, stats are coming out for cheaper, there something about this card that makes him better than anyone I’ve tried in the game: his positioning. I can’t begin to explain how he’s always in right place and making the perfect runs all the time. The guy always scores the crucial goal in the dying minutes of the game. I played 30 games with him, scored 40 (10 of them being winners in the last minutes). This record is even more impressive considering he plays in such a strong team, where I tend to score with various players

He’s unplayable. In terms of his finishing, he will score from anywhere as long as you have a clear shot on goal. His 5 star WF makes a huge difference, because all you need to do is make space, either on his right or left, and he will score. His dribbling is fantastic. Great hold up play, can easily play his way out of any tight situation, and can beat a defender with his eyes closed and humiliate them with his 5 star SM. He is also extremely rapid. There might be some quicker players out there, but he gets a huge pace boost when he’s running past a defender to pick up a through ball. He also scored some absolute banger volleys and long range shots.

The only criticism I could give him is that I wish he jumped just a bit higher. His heading accuracy is perfect but he sometimes he looses balls to bigger defenders. Last point is that he could also have slightly better passing (not very important when playing him st).

Overall there is just something about this card I haven’t seen in any other. Best striker I have ever played with by a mile (never tried toty Ronaldo). Don’t be scared of other TOTS because no matter how high their overall is, they’ll never be able to compare.

-> GAME CHANGER FOR ANY TEAM

Could have better passing and jumping (very minor)

In this period I was thinking to leave Fifa because of its annoying and stupid scripts that we found along the year, and I was checking for a right way to do it, and what can be a right way if not using your favourite player. So I decided to do his SBC.

Well, I can say that I have not changed my mind, but using this guy on Fifa is just amazing.

Apart from the fact that he scored at the first occasion, touching his first ball on the pitch, he feelsi instantly so comfortable, compact, agile and strong at the same time.

You know, when you buy a player you have to take a little time to adapt yourself to his moves, his game style, his skills... with r9 you don't:

it's impossible to not do good and extraordinary thing with this card, since the first moment you play with him.

It's impressive, a REAL CHEAT CODE, only his precence is just enough to scare anyone who is playing against you.

And with reason: It's sufficient use him in the correct way for a a couple of minutes and the opponent will be on the way to quit (just prove it).

This is because when he take the ball people have the impression that he can change the game in every moments he (you) wants.

I tried his baby version and I left that on the successive day, it was sheet. Just awful, I was angry. But this one, guys, is just unbelieveble, EA gave him justice.

I used CR7 in his variant, Ibrahimovic Messi, Benzema Suarez Quagliarella TOTS, Neymar, Werner Del Piero and variousprime and moments,, but this guy is hust something else.

Positioning 10/10 ABSOLUTE AMAZING. He is on the perfect part of the pitch every time, never seen something like that.Other strikers can oly tie his shoes. He is THE STRIKER.

Dribbling 10/10 Outrageous. He goes through the defenser with a mostrous simplicity. You just can't stop him. And in the rare occasion that it happens, he can quickly regain the ball.

Pace: 10/10 His velocity and accelleration are excellent.

Heading 8/10 Even if he has 90+ on jumping with the correct chem style, he is not at the level of Ibra and CR7.

Stamina 8/10 His stamina is good to finish his game, but on extra time probably you will have to tell him to stay infront.