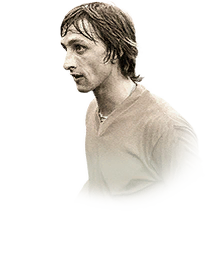 Due to the upcoming qualifiers with squad rating restrictions i managed to buy cruyff prime moment.

I already had the teenie and prime versions before and both of them were absolutely incredible in types of pace and finishing. (all with hawk chemstyle)

But this version is incredible in all the other ways too, because dribbling wise he feels a lot smoother and it is way harder to get the ball off his feet.

This leads to more consistency in case of passing / shooting / dribbling.

Generally he has a unique style of shooting the ball with high power into the corners of the goal. His ouside of foot shots are awesome as well.

It often brings a smile onto my face because i never saw some of those moves or shots from other players.

I don't think the price upgrade from his prime is somewhat justified. But in reality I really appreciate any little upgrade to cruyff.

Cruyff also scores more than my TOTY CR7 .. and that should say it all.

Oh my gosh. This guy. I don't even know how to start. I had packed TOTS Agüero in my Division Rivals Rewards (got lucky this time) I sold him right away as he wouldn't fit my Brazil / Seria A mix squad. I was actually pretty happy with my squad playing on a 4-2-3-1 with Allan and Fernandinho both TOTS as CDM. Neymar as CAM, Douglas Costa Birthday Card as LCAM and Mid Figo as RCM, in front Gold Cristiano Ronaldo as a lone striker. Now I had money to upgrade it, thought much about replacing Neymar with Prime Ronaldinho, but then decided not to due to his stamina. And I was also pretty happy with Neymar with his 5* combo.

Short cut, saw the SBC, completed it for 2.25 M and some untradeables. And this guy is just sick. The ball is literally attached to his feet when dribbling. He slips by most of the defenders easily, even when he gets pushed off the ball, he is really fast to get the ball again. His curve makes it perfect for shooting outside and inside the box. I even scored some headers with him from corners etc.

I'm a Gold 1 / Elite 3 player and I played with many Icons and good cards, but this I had never seen.

+Dribbling. Just everything about it. Composure, his balance, agility. This guy is by far in the most TOP 3 dribblers in the game. Even with tots.

+Brilliant runs he makes. This guy is playing with brain.

With me being Dutch, an Ajax and Barca fan it was my dream to get this card when it came out.

I used his 91 and 94 before and was determined on getting this PIM version, he's just amazing.

When I just completed it and played the first game with him I played him as a LCAM in a 4-2-3-1, but quickly noticed he should be in the middle.

His dribbling and passes are just sublime, he has a unique style of playing which makes the game a lot of fun to play. (Despite the gameplay).

Personally I don't use any skill moves so don't really need the 5* skills but the 5* weak foot is amazing, everything about this card is.

I use a deadeye on him as I feel like his pace is good enough for a cam and his dribbling stats are pretty much maxed out already.

The only issue with Cruyff might be his Stamina and Strength, but it depends on how you use him. I didn't have any issues with it personally.

I must say I usually only play offline, Squad Battles on Legendary and Offline Seasons on Ultimate but even Online this card is unreal.

When you first you use him it might take some time to get used to but you will instantly find the coins worth that you spent on him.

Stamina maybe. I personally didn't have an issue with it but it might be for some.

Strength maybe, for me not important as a middle CAM but it might be for some.

Firstly, I'll apologise in advance because this is my first time reviewing a player...

I decided to complete the Cruyff SBC after falling out with the team I'd stuck with all year.

He is very expensive, however I really feel that if you know how to use him you'll be incredible.

I know many others have played him at CAM and rave about him, and he was great for me at CAM, but personally if I've spent 3m on a card I want to play him at St and have the most fun with him.

Work rates (for me, anyway) H/L

Stamina (84) Not quite high enough compared to other ST's

Physicality (Can be shoved off the ball easily, but easily avoided with his dribbling)